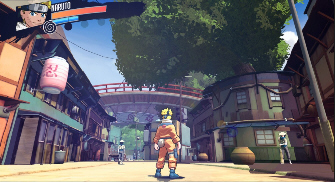 Not much is known about Naruto for Xbox 360 yet, but what is we’ve listed here:

* As you can see from the first screenshot, it will feature cel-shaded graphics.
* Naruto is an action RPG and fighting game based on Shonen Jump’s hit fighting manga.
* The Xbox 360-exclusive Naruto game will be released in America and Europe in 2007 by Ubisoft Montreal.
* The game will be specifically based off the English dubbed version of the anime Naruto.
* The game will include both an action-adventure single-player mode and versus multiplayer.
* Confirmed characters are: Naruto Uzumaki, Sakura Haruno, and Neji Hyuga.
* You’ll be free to walk in villages, talk to or fight with NPCs, jump from rooftop to rooftop, and running straight up trees and leaping between branches.
* Backstory: Naruto takes place in a world where ninja are the ultimate power. Infused with the spirit of a once fearsome Nine-Tailed Fox demon, Uzumaki Naruto is a ninja-in-training who is learning the art of ninjutsu with his classmates Sakura and Sasuke. The trio studies under the instruction of their teacher, Kakashi, who helps the group face a series of dangerous and daunting tests and challenges. Through their adventures, the young ninjas learn the importance of friendship, teamwork, loyalty, hard work, creativity, ingenuity and right versus wrong.