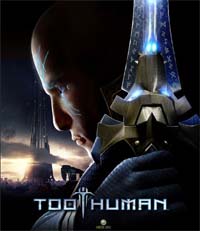 It doesn’t get any more ambitious than Too Human.

If you haven’t heard, Too Human is coming exclusively to the Xbox 360 courtesy of Silicon Knights, the same company that brought you Eternal Darkness & Metal Gear Solid: The Twin Snakes on the GameCube, and the original Blood Omen: Legacy of Kain for Playstation.

Too Human is an epic trilogy that looks to seamlessly integrate the best aspects of role-playing games (Deep story and fleshed out world with tons of NPCs, the ability to customize your character), twitch action games (think Devil May Cry, Ninja Gaiden, God of War, etc.) and even online components (such as four-player co-op) into a third-person adventure that negates camera control for smooth gameplay (no camera controlling necessary) and an all new way to fight enemies by using the right analog stick instead of buttons.

Add on top of that extremely pretty graphics and a hugely ambitious design with a story that asks philosophical questions like “What does it mean to be a human”, “What is the human soul” and “What would happen if you replaced a person’s parts with machines, would they still be human?”, etc., and you have what sounds (and looks) like a winner.

You can hear all about the game and more in this Denis Dyack podcast discussing Too Human and his thoughts on the video game industry. You may want to skip his rant in the first half btw. But definitely stay for the second half which is extremely interesting. It certainly hyped me up!

And for those that didn’t know, Too Human is NOT a new project. Matter of fact Denis Dyack says in 1up.com‘s podcast that ideas for the Too Human date back to 1993! They even had a prototype of the game up and running on the Playstation One. See it in action for not only the PSX but also the GameCube (in screenshot form) below:

Too Human running on the original Playstation! Too bad the video is recorded from the show-floor so it’s bad quality and there’s also no sound.

This is also a brief CG sequence from the Playstation version. Same case as above in regards to quality sadly. Though it’s still nice to see how far it’s come! But you go from this . . .

To this . . . An FMV screenshot of the GameCube version of Too Human (which is where development shifted after they became a 2nd party to Nintendo). 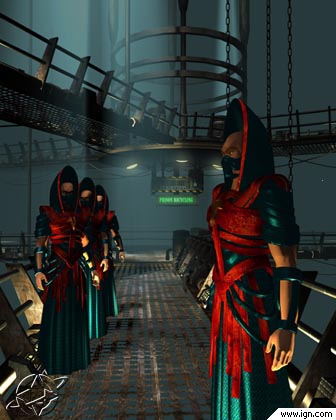 To this! Too Human running on the Xbox 360. From E3 2006.
Too Human G4 Preview
And last but not least, an in-depth look at the game by Denis Dyack (once again) via IGN on a Too Human Feature Amazing huh. Too Human, going from the Playstation version all the way to the upcoming Xbox 360 version, makes it one of the game’s with one of the longest development cycles. It’s crazy to see how far it came from the original Playstation version (even though the core story is still the same) and the fact that his original idea is now finally being realized. In a better form than he could have ever imagined!

Personally I think the game looks amazing and I’m definitely looking forward to picking it up upon it’s release. Heck I’ll even be buying an Xbox 360 to play it! 🙂