PlayStation Eye camera for PS3 release this summer (replaces the PS2s EyeToy). New games for it are: Eye of Judgement (Fall 2007), Ember, Skyblue and Aqua Vita 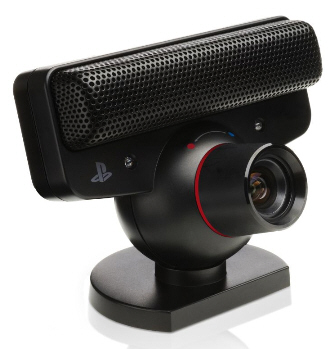 Sony has announced that their next gen Eye camera will be launched in Europe and North America this summer. Picking up where the EyeToy left off, the new device called PlayStation Eye is custom built for the PS3 and works as an accessory for voice, video chat and online gaming. Sony say it’s designed specifically to work with the next generation of social gaming titles and new YouTube-like services being developed for PS3.

Key features of the PlayStation Eye include:
* A sophisticated microphone with the ability to reduce background noise and focus on the spoken word for smoother, more accurate speech recognition and transfer
* The ability to capture videos and audio clips directly to your PS3’s hard disk drive
* Engineered to perform well even in low-light conditions
* A range of different capturing modes, including slow motion and time-lapse
* Faster frame rate for improved tracking, responsiveness and smoothness
* Two position zoom lens for close-up and full body options
* A range of eye-catching visual effects to apply to photos and videos
* Bundled with EyeCreate editing software, which allows users to save and edit photos, video and audio clips

Here’s some more specific info on the PlayStation Eye

EyeCreate software:
EyeCreate editing software, bundled free with PlayStation Eye allows you to save photos, video and audio clips to your PS3 hard disk drive and apply eye-catching visual effects to your images. Different capture modes like time-lapse and slow motion open up a world of possibilities to be explored further in EyeCreate’s editing suite, where you can turn your media into professional looking movies.

New microphone functions:
An all-new four microphone array, incorporating multidirectional voice location tracking, enhanced echo cancelling and background noise suppression allows for clear audio chat in even the most noisy of environments, without the need to hold or wear a headset.

Next-generation camera features:
A frame rate of up to 120 frames per second allows for super-smooth video and sophisticated low-light operation means that the room doesn’t have to be brightly lit for the camera to deliver crisp, perfectly exposed video. The adjustable zoom lens features a 56º field of view to capture head and shoulders action for close-in audio-visual chat, and a 75º field of view to capture the whole body for a fully physical gaming experience.

A PlayStation Eye interview answers more questions:
Does the new Eye differ from EyeToy much?
“It’s superior to EyeToy in nearly every way: four times the resolution, two times the frame-rate, two times the sensitivity and no compression artefacts. It has two fundamental new features: a two-setting optical zoom lens, and a built-in microphone array.”

Is the EyeToy even compatible with the PS3?
“Yes, but the picture quality is inferior to the PS Eye.”

Is the PlayStation Eye backward compatible with the PS2?
“No.”

What software comes with the camera? And what software and games will be available at launch or in the near future?
“It’s supplied with EyeCreate, which allows people to save photos, video and audio clips, as well as editing them and create truly individual movies using the different capture modes such as time-lapse and slow motion. Future software and games planned for use with the Eye will include Eye of Judgement, Ember, Skyblue and Aqua Vita, but the list will grow considerably over time.”

It sounds nice but what does â€˜ability to reduce background noise and focus on the spoken word for smoother, more accurate speech recognition and transfer’ mean to a consumer?
“PS Eye’s high-quality mic array allows PS3 to analyse the audio input and separate human voices from other sounds, such as fans, traffic sounds, laundry, vacuums, etc. This makes your voice clearer on the other side during chat, and makes it easier for games with speech recognition to understand what you are saying.”

Can the PS Eye work in low light?
“It’s much more sensitive than EyeToy, to the extent that although it still works best in a well-lit room, it can produce reasonable quality video by simply using the illumination given off by the television set.”

If you compare the PlayStation Eye with a normal digital camera, how does the zoom lens compare?
“The lens on PlayStation Eye has two optical settings: normal, which is a 56 degree field of view and wide, which is a 72 degree field of view. This is similar to some point-and-shoot cameras. The normal setting is similar to EyeToy’s configuration and the addition of the wide setting is intended for full-body tracking. The user can switch the setting according to match his desired experience.”

And how does the frame rate compare to other web cams?
“It has a very fast frame rate. Most webcams max out at 30 frames/sec, but the Eye typically runs at 60 frames/sec, which makes it twice as responsive and can also run at 120 frames/sec mode for extreme high-speed tracking applications. This makes it a very unique camera.”

What format(s) do the video and audio save in?
“All video and audio files produced via the Eye are specific files created for use only on EyeCreate, the software available free with the Eye. These files cannot be used on the XMB and therefore not exported.” 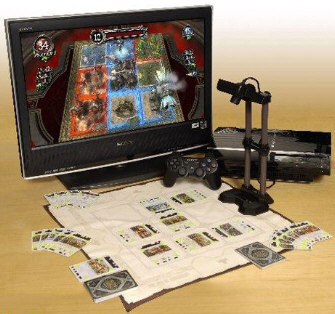