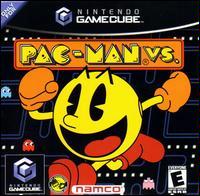 In Pac-Man Vs. you’re asked: “Can you catch Pac-Man?” Yes it’s the Pac-Man Vs. adventures starring the first real arcade hero, Pac-Man! In Pac-Man vs., players become either the Ghosts or Pac-Man. Both sides compete for the highest point totals. Pac-Man scores by gobbling fruit, pellets, and Ghosts. Ghosts, meanwhile, try to eat the fruit before Pac-Man arrives on the scene.

Pac-Man Vs. is not available as a stand-alone retail game, it only comes packaged as a bonus with the following other GameCube games: the Player’s Choice edition of Pac-Man World 2, and early copies of I-Ninja and R: Racing Evolution.

Assuming you’ve found a copy of Pac-Man Vs., you can’t exactly play it right away. The game itself requires GameCube connectivity with the GameBoy Advance (SP) to work. This means that you cannot play it without a GameBoy Advance (SP) and a GameCube-GameBoy Advance cable to hook that GameBoy Advance (SP) up to the GameCube. It is one of a few select GameCube games designed around the handheld-console link, the other games are Final Fantasy: Crystal Chronicles and The Legend of Zelda: Four Swords Adventures. 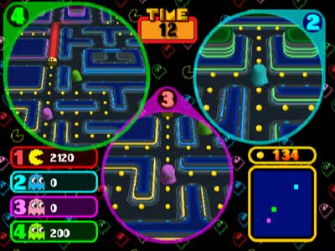 I loved, I repeat loved, hooking up the GameBoy Advance to the GameCube, because Pac-Man is the only one to see the entire playfield on it and has to try to finish eating all the dots before being discovered by a Ghost-friend looking at a blacked (see above screenshot) TV screen next to you. Or the other way around on the GameCube controller that allowed you to sneak around the maze as a Ghost with limited vision trying to catch a buddy who’d be the hard-to-find Pac-Man. Let’s explain how that works in more detail…

The gameplay uses the GBA in a unique fashion. One player controls Pac-Man on the GBA, which displays the entire maze, while the other players control each of the Ghosts on-screen with the GameCube controllers. The game cannot be played as a one-player game. One player must be Pac-Man, and at least one more must be a Ghost.

Pac-Man’s goal is to eat all of the pellets on the game board while avoiding being tagged by the Ghosts. The Ghosts’ goal is to catch Pac-Man, merely by touching him. These players each see a 3D-rendered limited view of the surroundings of their own Ghosts on the television screen as well as the area around the other players’ Ghosts, since they are all displayed on the same screen. Ghost players can temporarily extend their view by eating fruit. If a Ghost player catches Pac-Man, the two players switch controllers, with the successful Ghost player taking the GBA and playing as Pac-Man until he or she suffers the same fate of being caught. A small radar helps show the ghosts their relative positions to each other so they may attempt to team up to trap Pac-Man. Once there are less than 25 Pellets left on screen, they become invisible to the Ghosts.

If there are fewer than four players, any uncontrolled Ghosts start gray and are harmless to Pac-Man. However, a Ghost player can touch a gray Ghost and tag it with his or her own color. If a computer-controlled colored Ghost touches Pac-Man, it kills him and counts toward its owner’s score.

The first player to reach a predetermined score of 7,000, 10,000, or 15,000 points wins, and the game ends. While both Pac-Man and the Ghosts can score points by eating fruit, Pac-Man has the advantage of having more ways to score points. Pac-Man can score points by eating pellets on the board. For eating all the pellets on the board, Pac-Man receives a 1600-point bonus and gets to continue playing on a new board. If Pac-Man eats a Power Pellet, all of the Ghosts turn blue, and Pac-Man can eat them for bonus points. (Which, if possible, are subtracted from the eaten ghost’s score.) In addition, simply being Pac-Man is worth 1600 points, points which are lost and given to whichever player can catch Pac-Man.

There are several maps available, including the classic level from the original game. The classic stage retains a retro design and lacks any background music, but the remaining stages all have a theme to their design (Panic Pier appears to be made of Piers, for example) and a background song, most of which come from Pac-Mania. Despite the different aesthetic appearances on the TV screen, all the stages look as if they were on the original game when viewed on the GameBoy Advance.

What are the main features in Pac-Man Vs.?

* An innovative rendition of the arcade favorite. Designed by Shigeru Miyamoto exclusively for Namco and the Nintendo GameCube.

* Free with the purchase of Namco’s R: Racing Evolution, Pac-Man World 2 or I-Ninja for the GameCube.

* Choose from six different mazes and play as either Pac-Man or the Ghosts.

* Three players control the Ghosts on the television screen while the fourth player, controlling Pac-Man on a GameBoy Advance (SP), tries to avoid them.

* When a Ghost eats Pac-Man, it’s time to pass that GameBoy Advance to the winning Ghost, and continue the fun.

* Supports 2-4 players, so compete against your friends to earn points and win the game!

* The Pac-Man Vs. video game can only be played with a GameBoy Advance (SP) and connectivity cable connected to your Nintendo GameCube (sold separately).

Watch a Pac-Man Vs. gameplay video.

FUN FACTOR – 8.0
Pac-Man Vs. would never have graced the Nintendo GameCube if Nintendo’s own Shigeru Miyamoto, driven by his desire to create an updated version of his favorite game, Pac-Man, hadn’t contacted the game’s original creator, Mr. Iwatani of Namco. Pac-Man, which debuted in 1980, is one of the definitive arcade games of all time. It has generated many hit sequels, though nothing like the project Miyamoto and Iwatani dreamed up! In Pac-Man Vs., Pac-Man must navigate mazes, eating Pac-dots, Fruit, and Power Pellets as he dodges hungry ghosts, just like the original — but this time, human players control the ghosts as well using GameBoy Advance (SP) handhelds! If you can get get 1 to 3 friends to join you, the result is a hilarious mess to catch/avoid one-another while trying to get the highscore. If you like any of the past arcade Pac-Man games, you’ll love this quirky multiplayer-fun incarnation.

Graphics – 6.0
The game’s movements are smooth and the colorful visuals are clean. The handheld-console connectivity works seamless, so everything moves around slick thanks to the overall classic simplicity.
1. The GameBoy Advance (SP) screen displays a pixel-perfect 2D classic game of Pac-Man.
2. The GameCube hardware is hardly used for the 3D-rendered graphics, which despite the game’s simplicity is a shame, because now all you’re getting is some slightly better graphics in a maze with dots, fruit, with Pac-Man and the Ghosts thrown in there.

Audio – 6.0
Mario’s creator Shigeru Miyamoto, who designed the game, made sure Mario was the game’s announcer. Mario, as always voiced by Charles Martinet, comments on the happens with lines such as “It’s-a not looking so good-a!” when a Ghost is near Pac-Man or when the roles are reversed “Pac-Man ate a Power Pellet!”. The classic Pac-Man music is back, it doesn’t sound that impressive, but it gives a great retro feeling. The remixed Pac-Man tune is especially nice. Whatever you think it won’t matter, because you’ll be too busy shouting at your friends to hear most of it anyway.

Ingenuity – 9.0
What makes Namco’s classic Pac-Man game so much fun in this Versus version? Aside from the classic addictive gameplay that’s in tact, it’s that Nintendo’s Shigeru Miyamoto designed the entire game to update it and added the major handheld-console connectivity twist. Using this twist the lead player, viewing the entire maze on the GameBoy Advance, must avoid the other three players controlling the ghosts on the television screen. To raise the tension factor, the three ghost players can only see part of the maze around their characters. Pac-Man must clear all the Pac-dots in each maze, while avoiding the Ghosts, to progress to the next maze. It’s got a great and simple pick-up-and-play design. Very innovative use of the GameCube-GameBoy Advance cable handheld-console link.

Pac-Man Vs. is addictive and fun and in theory you could enlessly return to it if your friends or family think its enjoyable for a quick game once in a while too. It’s a pretty bare-bones packages when you look at the options, since there are none, there’s just the one play mode (although the maze has six maps). But with no options to adjust, nor any highscore lists being saved, it’s not much. You either win or you lose, it’s that simple. That said, the elegant simplicity of Pac-Man Vs. elevates it to a place among the finest multiplayer games on the Nintendo GameCube. Even if you disliked previous Pac-Man games, you won’t be able to deny the fresh, unbridled multiplayer mayhem of Pac-Man Vs.

You can get your copy of Pac Man Vs. for free, but only if you buy Pac-Man World 2, R: Racing Evolution or I-Ninja. It might be a bit hard to get, but it’s cheap at Amazon and eBay who should always have the disc available. I didn’t get it as a bonus game with another game, but loose on eBay instead. After which I picked up an empty GameCube box to keep it in, and to fill up the empty front of the box I downloaded a custom-made Pac-Man Vs. box cover. If anyone ever wants that cover, just leave a comment and I’ll try and find it.

Update: Namco Museum DS also includes Pac-Man Vs. and you can even use single-cartridge multiplayer to play it with a total of four players.