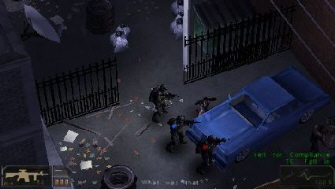 Vivendi Universal Games (Sierra) has made a surprise announcement in bringing the SWAT PC tactical shooter series to the PSP handheld. Titled SWAT: Target Liberty, the PSP exclusive is set for release in October 2007 and will be developed by 3G Studios, instead of SWAT 4 developer Irrational Games.

But that’s not he only difference from the PC series this PSP version will see:
1. Instead of the traditional first person shooter view, the game sights switches towards a third person shooter with an isometric perspective, which takes away some elements of surprise.
2. The tactical shooter takes a more arcade-like direction (like Killzone PSP?) in this new installment to make it more accessible than the PC series, but some realistic elements will remain, like a smart A.I. in enemies during the single player mode. To extend the lifespan of the game there will be randomly generated levels.

The story will be written by Scott Rosenbaum (The Shield), the scenario puts you in the shoes of a certain Kurt Wolfe, who is in charge of a SWAT team (you pick two colleague specialists at the start) in New York City. The Big Apple will provide the game’s twelve missions where you’ll have to make assaults and rescue hostages, all in an attempt to track down a terrorist group hell bent on exploding a nuclear device in the city.