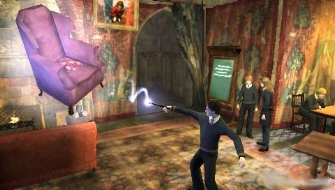 The Harry Potter and the Order of the Phoenix game release date is between sometime in June and July 6th, before the fifth Harry Potter movie comes out on July 13th. The game will be released for the Wii, Xbox 360, PlayStation 3, PlayStation 2, PSP, Nintendo DS, Game Boy Advance, and PC.

Game maker Electronic Arts has given the game a sandbox-style mission gameplay similar to that in the Grand Theft Auto games, but without any “Crucio” or “Avada Kedavra” violence of course. The theme of the game will still be to explore Hogwarts and follow the story from the book and movie.

But thanks to the new free-roaming, you can do many unexpected things. In the game are many “discovery points,” which can be activated by completing various challenges, and they reward the player with spells and level advancements. For example: When you get a group of Snitches together in a room and set them loose on some levitating books, you can win discovery points.

IGN also describes that walking through the castle as the myriad of portraits shift around and the staircases revolve is easily as impressive in the title as it is in the movies. You really feel like you’re at the wizards school.

While most of the game’s missions are still a mystery at this point, what is known is that it will have a Quidditch mini-game and playable versions of Sirius Black and Dumbledore.

Since the game follows the story of shown in the movie, here’s the Harry Potter and the Order of the Phoenix trailer: