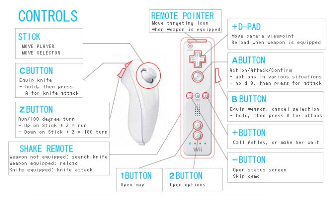 Capcom will release Resident Evil 4: Wii Edition on June 25th, 2007, at a price of just $30. The Gamestop online store was recently updated with the game’s extra features.

New and other key features are:
* Wii-mote Action! – “Moving the Wii controller allows players to aim weapons, slash with the knife, control action sequences and much more” (click above picture for control overview).
* “Separate Ways” – Play as Ada Wong in five new chapters [new from the PS2 version, added after the GameCube release] that reveal startling insight into the original storyline.
* Supports true 16:9 widescreen and Dolby Pro Logic II.
* Award-winning gameplay “Resident Evil 4 has won multiple Game of the Year awards.”
* Unsurpassed Visuals “Resident Evil 4 features breathtaking 3D graphics and effects!”
* Behind the Camera View “Camera follows you from behind and allows for intuitive movement.”
* Advanced AI “Enemies use their cunning abilities to team up and attack the player en mass.”

Listing found by Kumiko, translation of picture by IGN.