Home » News » Rip your friends head off with the Wii controller in Mortal Kombat: Armageddon

Rip your friends head off with the Wii controller in Mortal Kombat: Armageddon 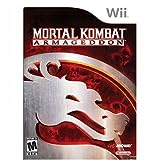 Midway released a Mortal Kombat: Armageddon tutorial video today demonstrating how the Wii Remote and Nunchuk will work in the upcoming Nintendo Wii game that will be released on May 14, 2007. Mortal Kombat creator Ed Boon shows how to execute fatalities and more. “Even puking has never been so easy!” But will the video show you can rip your friends head off with the Wiimote? Only one way to find out how, watch it:PS: Common sense says you should not decapitate your friend, ok, just so we’re clear on that. — Via Gamingbits