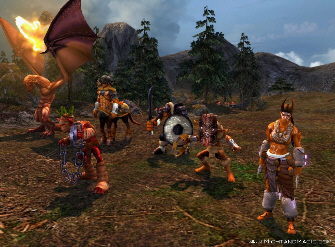 Ubisoft just announced that Heroes of Might & Magic V: Tribes of the East will arrive for the PC in fall 2007. Developed by Nival Interactive, this stand-alone product will allow both long-time fans and series newcomers to enjoy the dramatic evolution and conclusion of the Heroes V strategy experience.

About the game: For the first time, play as the Orc faction and recruit heroes, build armies and manage cities as you explore and conquer legendary lands. Use tactics, skills and magic to outsmart fantasy armies while developing your heroes and unveiling the dark plot that threatens to tear the world of Ashan apart.

About the storyline: This final chapter in the epic struggle that began with the interrupted wedding of Queen Isabel. Players will follow the steps of the Necrolord Arantir as he uncovers the prophecy of the Dark Messiah of Might and Magic and exposes the Demon Sovereign’s conspiracy.

The key features are:

* New Orc Faction: First made famous in Dark Messiah of Might & Magic, the brutal Orc faction now comes to the Heroes series. Savage, fiercely proud, and resolutely independent, the Orcs put the “mightâ€ in Might & Magic. This faction’s troops include Orcs, Goblins, Cyclops, and the famed Pao Kais.

* New Campaign: Experience the dramatic conclusion of the usurper Biara’s reign. Discovering the demonic influence that corrupts the Haven knights, the savage clans of the Orcs will take up arms to eradicate the Inferno threat. Characters from Dark Messiah of Might & Magic will also appear to bring an unexpected twist to this multi-layered plot. In addition, tribes of the East will also feature 10 multiplayer and five single-player maps.

* New Upgrade Level: Every creature in the Heroes V universe will get an alternative upgrade level, increasing the total number of creatures in the Heroes of Might & Magic V line to over 170! These powerful new abilities are sure to become an integral part of your combat tactics.

* Extra Content: Expand your arsenal and gameplay with new spells, artifacts, buildings and innovative features such as the combo-based Artifact Power Link and Battle Rage, the unique racial ability of the Orcs.

* Standalone Product: In order to allow both fans and newcomers to enjoy this dramatic conclusion to the Heroes V experience, Tribes of the East will be a standalone product â€“ no previous Heroes game installations will be required to play.

“With a vast array of new content and an engaging, epic narrative, Heroes of Might & Magic V: Tribes of the East will thrill devoted fans of the series,â€ said Tony Key, vice president of marketing for Ubisoft North America. “It’s a fitting end to Heroes V â€“ the most accessible chapter yet combined with the industry-leading quality that has made the Heroes franchise a benchmark for strategy gaming.â€