House of Flying Daggers Online, the 3D PC MMORPG martial arts game, will have its beta test in June 2007

House of Flying Daggers Online is a 3D MMORPG with a martial arts theme, it’s a remake based on the 2002 movie with the same name. The PC game is set back in the Tang Dynasty, the majority of the elements is drawn directly from the popular hit feature film with customized storylines and tones to fit an online game.

The game will start public beta test in June 2007, which indicates the secondary exploration of a domestically produced film properties will soon take off. 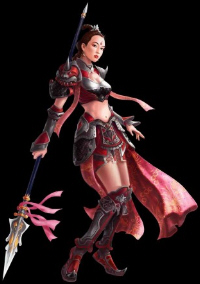 A translation from Chinese done by Onlinewelten reads: “So, in House of Flying Daggers OL, the enactment for female part follows ancient beauty taste of Tang Dynasty. Not only female NPC in the game is, but also the beginning enactment for players is (stature can also be set by players). Then, pretty wearing can be matched, so that the beautiful gesture and face of Tang Dynasty can be wholly showed!”

Here I was thinking House of Flying Daggers was more of a love story than a martial arts film. I guess Chinese developer T2CN will take all the stylized martial arts violence out of the movie and put it in the game. — Via Gamerbeef