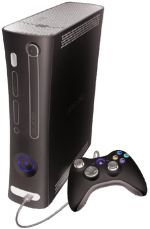 Microsoft today confirmed that a brand new Xbox 360 “Elite” model is coming, as we previously reported. Most of the details in our previous story were confirmed, however there are a few differences. I’ll bullet list all you need to know for easy reading.

* Called the Xbox 360 Elite (pictured), the console will go on sale in North America on April 29, with European and Japanese launches later in the year.

* It will come packaged with a 120 Gigabyte Hard Drive. For comparison sake, the old 360 HDD was a scarce 20 GB. Hardly enough to store HD movies or TV shows.

* The case, controller, and Live headset will all be black. And the Elite will have all new packaging.

* The Elite Xbox 360 package WILL NOT be a limited edition. It will be a permanent addition to the product lineup alongside the hard-drive less $299 Core Xbox 360 and the HDD equipped Pro Xbox 360 models, both of which will remain their white color.

* The console will include an HDMI output port and come bundled with an HDMI cable, as well as a component video cable.

* The only way to transfer data from your old 360 HDD to your new Elite 360 HDD is via a Data Transfer Cable . . . which is only included in the box if you buy the HDD drive separately for $179, and not in the Elite package. Microsoft says they are, “working on a solution”. [Why not just include it in the Elite package?!]

* The Elite package does NOT include an internal HD-DVD drive, and the 360 HD-DVD drive already on market will not get a matching black color for the Elite system.

* The Elite Package will not include Internal Protocol TV functionality. IPTV trials will start this summer, says Microsoft.

In addition to confirming the Elite Xbox 360 package, Microsoft announced a wave of new TV shows and movies that will be coming to the Xbox Live Marketplace (XBLM) and the studios that will be offering them, so you can start filling up all that new space your 120GB HDD offers.

New Line Cinema, already a Marketplace video partner, will make more movies available, including Snakes on a Plane, Texas Chainsaw Massacre: The Beginning, and Tenacious D in the Pick of Destiny. The Time Warner subsidiary will also offer more of its back catalog, including ’90s staples like Austin Powers: The Spy Who Shagged Me and Magnolia.

The A&E (Arts & Entertainment) network, which has a lot of broadly appealing shows, will be offering some of it’s most popular shows from their current line-up, including Dog the Bounty Hunter (YES! I love that show!), King of Cars, Driving Force, Criss Angel Mindfreak, and Gene Simmons Family Jewels.

For those more prone to the outdoors, the service will soon feature several new offerings from the National Geographic Channel. Episodes from the series Is It Real? and Taboo will be available on the service, in addition to specials like “Air Force One” and “21 Days to Baghdad.”

Anime fans will also be able to shortly download programs from ADV Films, although no particular titles were named by Microsoft. The final partner is TotalVid, an extreme action sports channel which focuses on such invigorating and death-defying pastimes as snowboarding, skateboarding, motocross, surfing, and mountain biking.

On a personal note, I am extremely happy to hear about the new Elite Xbox 360. I was surprised by the size of the new included HDD, I did not think that they would include one so large (talking about capacity of course, not physical size :P).

That’s very good for me since I do not yet own a 360, so I will DEFINITELY be buying the Elite package when I do get one. The price is good all things considered, although paying nearly $500 for a console is still really steep IMO, anyway you slice it . . . but I guess I better get used to it as it’s apparently the new trend for the foreseeable future. Course, I’m still buying a Wii first. 😉