Home » News » Get down and Boogie with Wii

Get down and Boogie with Wii 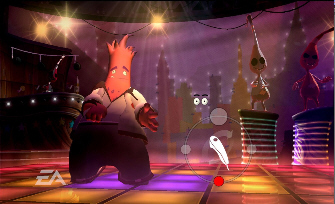 Electronic Arts today announced Boogie will be released exclusively for the Wii worldwide in 2007. Boogie is a unique music/rhythm-based game that takes advantage of the innovative Wii controls to get gamers off their couch, playing and dancing to a new beat.

â€œWeâ€™re creating something new and different for gamers of all ages to enjoy; the complete party package where gamers can dance as well as sing,â€ said Alain Tascan, Vice President and General Manager, EA Montreal. â€œNintendoâ€™s Wii is an amazing console that really gives us a platform to be creative and to re-think traditional game development.â€

Boogie will have gamers dancing (with Wii controls), singing (with the song or on a Wii microphone?) and starring in their own music videos (could be Mii support!).

Players can also choose and customize different characters in the game to best show off their dancing style and karaoke skills. With fresh gameplay that matches the unique Wii controls, Boogie could be the ultimate videogame party package. Especially if they include some sort of stylized Mii support.

Boogie is the latest addition to EA Montrealâ€™s roster of high profile games like SSX Blur for Wii and Army of Two for PS3 & Xbox 360. SSX Blur is the newest version of the critically acclaimed snowboarding franchise that shipped exclusively for the Wii in February. EA Montreal is also working on Army of Two, the highly anticipated shooter and original intellectual property that will attempt to redefine strategic two-man cooperative play.