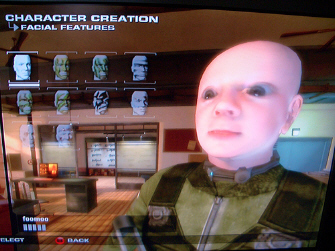 Whether you think it’s cute or scary, this infant’s dad sure was inventive. He took pictures of his kid’s face with the Xbox 360 Vision camera to customize his Rainbow Six: Vegas character using the Persistent Elite Creation tool.

To quote the baby’s daddy: “I captured Stan with the Xbox camera and used his face for my soldier in Rainbow Six Vegas. In actual gameplay the soldier looks more like a mutant fish-man… Since taken, Soldier Stan has risen to the rank of Staff Sergeant.” Bigger picture at Flickr. Via Digg