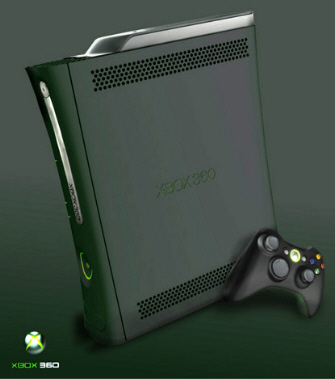 Just confirmed by Engadget‘s sources at Microsoft is that the black Xbox 360 is indeed coming and is called the Xbox 360 Elite! Here are all the details lined up:

* The new black colored Xbox 360 Elite is coming in late April, 2007.
* The 120GB Hard Drive will be sold separately for under $200. All new black accessories will also be sold separately.
* The Elite will be limited quantities only; that may be as much or as little as a couple 100,000s.
* The case, controller, and Live headset will all be black. It will have all new packaging.
* Elite will cost $479.99, and will be a 3rd SKU; it will be sold alongside Premium and Core packs.
* Eventually Elite hardware (in white plastics) will take the role of the Xbox 360 Premium at the current Premium set price of $399.99. That is to say, after the black Elite is launched and sold out, future white Xbox Premiums will have 120GB / HDMI.
* We do not yet know exactly when 120GB / HDMI will become the standard for Premium, but it is loosely estimated to be late summer or fall of 2007.
* Elite models run cooler than normal 360s, but they are not yet confirmed to have 65nm chips.

They also answer some other questions you might have:
* Prices may remain the same with the 120GB / HDMI hardware upgrade in the Premium Xbox, but we may still see a price cut on the line when 65nm chips start shipping.
* The HD DVD drive will not be internal or bundled — Microsoft never did or nor does not currently have plans to put an HD DVD drive in the 360.
* There are no current plans to integrate WiFi into the Elite or future Premiums (although that can always change).

This is great news for gamers with a HDMI port on their HD TV, who don’t have an Xbox 360 yet. But current owners will surely feel the pain of a filled up 20GB hard drive and having to pay below $200 for a replacement hard drive is a must considering most 120GB internal-external hard drives cost about $30-$50 nowadays! Hopefully Microsoft will announce an easy way for current Xbox 360 Premium owners to swap their 20GB for 120GB that sees Microsoft copy over your gamertag, save files, video data and such for you.