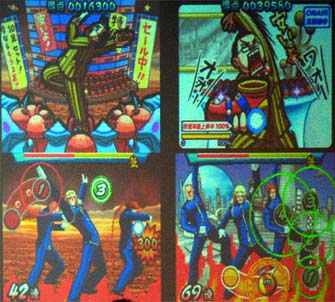 Keiichi Yano is the co-founder of iNiS Corporation, he spoke at GDC yesterday. He was a designer on both DS games: Osu! Tatakae! Ouendan, and its Western counterpart Elite Beat Agents. His presentation was titled “From ‘OUENDAN!’ to ‘HELP!’: Inside the Elite Beat Agents.” iNiS is again working on a Ouendan sequel for Nintendo of Japan.

The above screenshots were revealed as conceptual art for the opposition, and he’d only go so far as to name them “Sai Yon Ji.” He then promised “some features for hardcore” fans of the series, but did not elaborate. During the Q&A session a fan asked if any Ouendan games might be brought directly to the West, since some gamers preferred the original Ouendan to its counterpart, Elite Beat Agents. Yano laughed and said, “I realize some people enjoy Ouendan more,” then said he hoped to make a better Elite Beat Agents game that would appeal just as much, or more. A murmur went through the crowd, and Yano shook his head. “No,” he insisted, laughing, “I did not just announce anything.”

Yano was very evasive when asked whether Inis had considered bringing the Ouendan franchise to another console. “Yeah, we’d consider it,” Yano laughed. When someone specifically addressed the Wii, Yano became a bit more forthcoming: “We’re in talks with Nintendo — hopefully, we’ll have something to talk about soon.” Quotes from 1up, pictures via Neogaf.