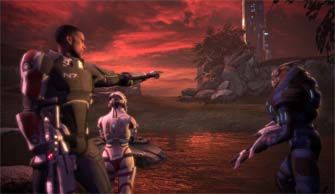 Bioware game creators Dr. Greg Zeschuk and Ray Muzkya demoed the first hour of Mass Effect to press pre-Game Developers Conference. The opening went like this: “I’ve got a bad feeling about this,” one of the pilots of the space cruiser Normandy mutters in the first hour of BioWare’s can’t-come-fast-enough space opera Mass Effect. Sci-fi trainspotters will recognize the line almost instantly as it appears in every Star Wars film (Bioware previously developed the Star Wars Knights of the Old Republic games). Like the other subtle Lucasian flourishes, these aren’t shameless rip-offs; they are sublime homage.

You can actually choose between a male or female human persona and from six classes around which to construct your character. So not just “Commander Shepard” seen in all screenshots. Shepard is the only Human Spectre – as such, he is both an elite agent that operates outside the law to maintain peace, and the star representative of mankind in the eyes of other races and species. But what about that alien looking fella seen in the above new screenshot? He’s Saren, a Turian…

…Turians hail from the planet Palaven. Palaven is largely Earth-like in nature, being what is known as a Garden Planet. Lush greenery and oceans are the primary geographic features to be found there, and the planet is ideal for supporting life. Turians are a tough, raptor-like humanoid species. The Turians are one of the three races with a seat on the Citadel Council (the central seat of civilization in the universe). Their autocratic society values discipline, but is tempered by a strong personal and collective sense of honor. Turians fill the role of peacekeepers for the Council, using their large military to preserve peace and order in the face of piracy and external threats.

The Mass Effect name can be explained with the following game history: In 2148 AD when humans discovered a small cache of highly advanced alien technology hidden deep beneath the surface of Mars. Building on the remnants of this long extinct race – known as the Protheans – we quickly mastered the science of mass effect fields, leading to the development of faster than light travel.

Almost a decade later, in 2157 AD, humanity made first contact with another space-faring culture: the Turians. Unfortunately, the encounter was far from peaceful. Over the next several months a brief but tense conflict known on Earth as the First Contact war ensued.

This conflict drew the attention of the Citadel Council – a multi-species government body that maintains peace and stability throughout the known galaxy. The Council intervened before hostilities could escalate further, revealing the existence of the greater galactic community to humanity and brokering a peace between them and the Turians.

Humanity continued to expand, founding more colonies and establishing trade alliances with many of the other species who recognize the authority of the Citadel Council. In 2165 the Council made official recognition of humanity’s growing power and influence in the galactic community. Humanity was granted an embassy on the Citadel, the political and economic heart of the galaxy.

Hopefully we’ll soon get to see new footage of some of the hundred planets in the Mass Effect galaxy and the character animations at the Game Developers Conference.

Full previews at GameSpot & 1UP. Storyline via Gamespy