Only Spider-Man 3: Collector’s Edition on PS3 features the New Goblin as playable character 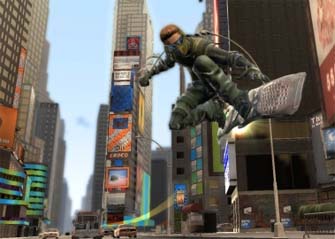 Using a unique locomotion system that’s entirely controllable with the Sixaxis gamepad, the New Goblin will be able to zip through the city streets and between skyscrapers and other buildings at super-high speeds. will have access to 10 exclusive race challenges and the ability to participate in every “Crime Event” in the city — allowing him to use his pumpkin bombs against all three city gangs and other game enemies.

Other bonus features include: Webisodes from the Spidey 3 movie, an exclusive interview with producer Avi Arad, and behind the scenes talks with Tobey Maguire, Topher Grace, Thomas Haden Church, James Franco, JK Simmons, and Bruce Campbell are also included. Players will even be able to access special Spider-Man 3 trailers and a couple of other undisclosed goodies. Expect the multiplatform game to arrive alongside the movie on May 4th, 2007.