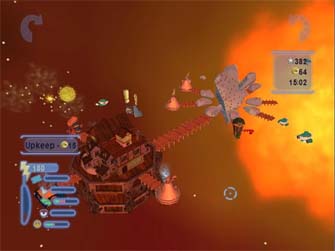 Space Station Tycoon is the latest in the series of Tycoon simulation titles. You take on the role of Shawn, a “wet-behind-the-ears kid” and his sarcastic friend Tam. Players use the Wii remote to manage galactic space stations, all the while increasing their income. The game comes to life with a unique storyline that revolves around witty banter and humorous plot progression. Space Station Tycoon is set for a summer 2007 release on Nintendo Wii.

“Space Station Tycoon utilizes the creative and unique functionality of the Wii by allowing gamers to emerge themselves in a type of tycoon gameplay never before experienced,” said Makoto Iwai, executive vice president and COO of Namco Bandai Games. “Its fun-loving characters and off-the-wall space station scenarios should have Wii owners scrambling to get their stations thriving.”

The developer is still exploring if they will run the game in 480 progressive-scan and 16:9 widescreen modes on Wii. Releasing additional content via Nintendo’s WiiConnect24 service is also being explored. While the game won’t feature an online Nintendo Wi-Fi Connection multiplayer mode, but it will have a co-op and party mode.

PS: It has monkeys and pirates in space! Interview at IGN.