This May the third Pirates of the Caribbean movie sees Captain Barbossa, Will Turner and Elizabeth Swann make their final alliances for one last decisive battle. So what’s next for Disney?

According to Disney blogger Jim Hill The Walt Disney Company has gone franchise-crazy lately, with sequels being prepped and/or considered for virtually every project the studio currently has in its production pipeline. To quote: 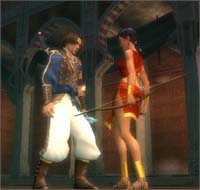 “This is why Walt Disney Pictures — in conjunction with Jerry Bruckheimer Films — is now gearing up to put a “Prince of Persia” movie into production. Because it’s thought that a film based on this hugely popular series of Ubisoft Entertainment games (Which — in theory — will be Disney’s big action-adventure release for the Summer of 2008) could then lead to a new hit series of movies for the studio.” [The movie has since been moved to Summer 2010.]

The first blockbuster movie will likely be based on the excellent video game Prince of Persia: Sands of Time, which follows an adventurous prince who teams up with a rival princess to stop an angry ruler from unleashing a sandstorm that could destroy the world. — One big question is which actors will play the prince and princess? Another big question is asked by 1up, and it’s if like back in 2004, the original Prince of Persia game designer Jordan Mechner will still be writing the script?