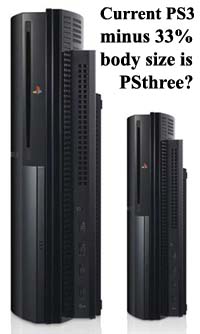 Logic would dictate that the PlayStation 3, which was first released in 2006, will get a smaller version by 2011. But since it’s Sony’s biggest games console so far, they are already working on the next generation of the PS3 reports T3.

Sony has said they expect to cut the size of its console’s insides (smaller chips, heatsinks, etc.), which leads the way for a redesign on the outside (we dubbed PSthree). Sony Japan says they’ll transition from 90-nm to 45-nm chips by 2008, or early 2009.

Update July 1st, 2009: Taiwanese website UDN has reported that Sony signed production contracts to begin manufacturing a new model PS3 Slim. Apparently the companies Foxconn and Pegatron are working towards delivery of the remodelled system for July 2009. Other reports have suggested an August 2009 launch for the new slim PlayStation 3. As well as simultaneous price cuts for previous PlayStation 3 hardware. 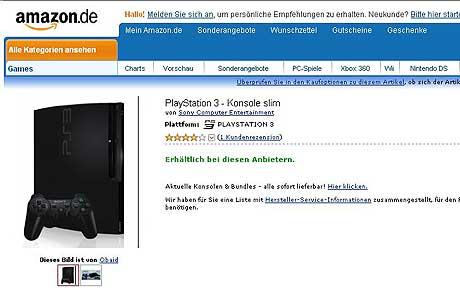 Update August 11th, 2009: A PlayStation 3 Slim console listing appeared on Amazon’s German website last weekend, but was quickly removed. Tie this in with rumors of Sony ordering enough parts from its PS3 manufacturers to make 1 million consoles in the third quarter of this year, and you’ll start to wonder why they’d need twice as many as did in the last three months. Expect an official announcement at the GamesCom video games show in Cologne, Germany, on August 19th when Sony has a 3-hour-long press conference.