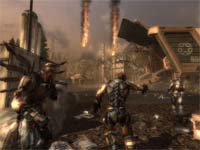 The war between the GDF and Strogg will soon be igniting on next-generation consoles as id Software and Activision today confirmed that Enemy Territory: QUAKE Wars, the team-based first person action title is coming to pc and consoles in sometime (summer?) 2007.

In this epic multiplayer-focused game, players can choose to defend humanity as a part of the Global Defense Force (GDF) or destroy it as a merciless Strogg alien invader.

Players choose to battle as one of five unique classes in either the conventionally armed GDF army or the futuristic Strogg invasion force, each outfitted with specialist weapons and combat hardware. In this adrenaline pumping fight for survival, warring forces utilize a variety of over 40 different vehicles, deployable structures, and defense systems including: quad-bikes, tanks, and alien walkers for epic ground assaults; or helicopters and anti-gravity ships to unleash airborne attacks. Throughout each battle, teams establish bases, deploy defense structures, artillery, radar, and advanced forward-command systems into enemy territory while constructing and demolishing obstacles to speed progress and gain a tactical advantage over the opponent. Enemy Territory: QUAKE Wars multiplayer features 16-player battles on consoles (24-player battles on PC), delivering the ultimate team-and objective-based multiplayer experience. — Check out the PC trailer below: