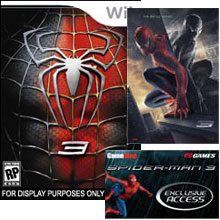 Not much was known about the upcoming multiplatform game based on the Spider-Man 3 movie. Of course you’ll be battling against villains from the film, but what else? Last weekend U.S. store chain EB Games (who give away a movie poster if you pre-order) got briefed by Activision on what Spider-Man 3 would offer when it’s released on May 4th, 2007.

This revealed the Wii version delivers the sensation of swinging through the city via the Wii Remote and Wii Nunchuk. Itâ€™s like nothing youâ€™ve ever experienced before on the Wii. But that’s not the only difference compared to the Xbox 360, PS2, PS3, PSP, GBA & DS versions. The Wii version will include two bonus Marvel villains: Morbius and Shriek.

New features show that Spider-Man…
* Possess the never-before-experienced powers of Black-Suited Spider-Man. Feel the adrenaline as your powers explode in the role of Black-Suited Spider-Man, unleashing incredible agility, amazing durability and awe-inspiring web abilities. But be warned, the rush your intensified powers bring could overwhelm you.
* Experiences more freedom than ever. More city than ever. For the first time you can enjoy unprecedented freedom, choosing what you want to do, when you want to do it. Thereâ€™s no checklist to complete in order to progress. You set your own next goal, roaming anywhere you want (including subterranean areas such as subways, sewers and villainsâ€™ lairs) in the most massive, detailed New York City ever seen in a Spider-Man game.
* Has an all-new combat system, two exciting ways. Redesigned from the ground up, a unique combat system empowers both Spider-Man and Black-Suited Spider-Man to perform suit-specific powers and abilities. State of the art animations, combos and finishers make punch, kick and web attacks more super-heroic than ever. Battle 10 of Spider-Manâ€™s most infamous enemies from the movie and Marvel universe, including Sandman and Venom.

It’s hard to say which to look forward to more, the game, or the movie…
Tip via C&VG