Sony Pictures Entertainment vice chairman Yair Landau revealed at this year’s D.I.C.E. Summit that they’re “working with the Metal Gear guys” on a movie featuring Snake. The film was announced at a Konami press conference in May 2006, where the game’s director Hideo Kojima revealed that his most famous creation, Metal Gear Solid, was getting its own live-action movie.

Now that the studio is known to be Sony, will Solid Snake’s voice actor David Hayter be tapped to play him in the movie? He’s got the voice, he’s an actor & they do kind of look alike: 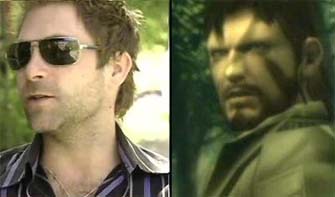 Landau also hinted the Metal Gear Solid movie may just be the beginning. “There are other games we are looking to develop,” the executive said. “We’re working with one of my favorite producers right now on an idea for an EverQuest movie.” The producer will reveal himself in due time. A World of Warcraft movie is being created too, so we’ll get our fill of game-film project.

After Universal and Fox Studios backed out of the Halo movie and that was put on hold, it’s doubtful Peter Jackson & Microsoft will team up with Sony to get the movie released. So that’s wait and see there as well. Quotes via Gamespot