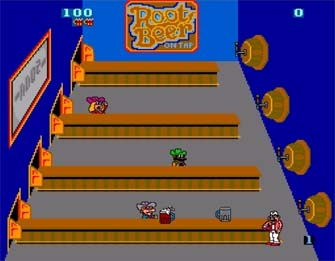 Root Beer Tapper is one of the free webgames you can play on your PC at Midway’s Web Arcade page. The other playable flash games on that page are: Bubbles, Defender, Defender II, Joust, Rampage, Robotron 2084, Satan’s Hollow, Sinistar, and Spy Hunter. The reason I’m mentioning all that is because, instead of buying today’s new Xbox 360 Live Arcade release Root Beer Tapper, you should be saving your money for the 9 other new Xbox Live Arcade games that will be released in weeks to come.

Of course Midway’s Xbox 360 port of Root Beer Tapper will have added online play in co-op and versus modes. The game will be available for download worldwide (except for Korea and Japan) on Xbox Live Arcade after 8AM GMT (1AM PST). Costs: 400 Microsoft Points (that’s $5 / €4.80 / £3.40).

The key features include:
* Authentic to the original game, Root Beer Tapperon Xbox Live Arcade brings you a classic favorite.
* Take on a bar full of thirsty folks in Root Beer Tapper and see if you can keep their mugs full.
* Grab the empty mugs before they slide off the bar.
* Earn extra points by collecting tips.
* Locate and open the one can that has not been shaken up and serve it up to waiting patrons in the bonus rounds.
* Enjoy high-definition support for detailed graphics.
* Play either locally or over Xbox Live in co-op or versus modes.
* Have your scores posted on the Xbox Live Leaderboard. High scores are tracked for the current week and also for all-time arcade, co-op and versus game modes.
* Earn up to 12 Achievements and 200 gamerscore points.

So get ready to serve and rediscover the classic arcade game Root Beer Tapper. Take on a room full of thirsty folks and keep their mugs full as they belly up to the bar, but don’t drop the empties if you want to win.