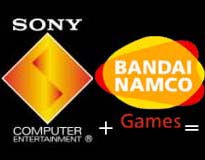 Sony just announced its PlayStation unit will start developing games together with Namco Bandai to help take marketshare from Microsoft and Nintendo. Which seems bold of them to say as (a minority of) Namco Bandai is in fact partly owned by Nintendo.

Namco Bandai will own 51% of the venture, named Cellius, with Sony holding the rest, Sony said in a faxed release today. The venture will start making games on March 6th, 2007, and the chairman will be Sony’s Ken Kutaragi, the PlayStation’s daddy, who stopped acting as president of Sony Computer Entertainment after some Sony management reshuffling in November 2006.

Cellius will use Sony’s Cell chip, which powers PlayStation 3, to create games for the console and content for mobile phones and personal computers, Sony Computer Entertainment spokesman Satoshi Fukuoka said today. He would not give earnings forecasts or other details.

The alliance may help Sony recoup the 200 billion yen ($1.65 billion) it spent developing the Cell with International Business Machines and Toshiba. Sony is expecting the PS3 to attract gamers with sharper graphics and more complex gameplay.

The Cell chip is also part of Sony’s strategy to beat Microsoft and Apple in controlling the digital home, a future network linking televisions, music players, game consoles and other appliances to the Internet.

Here are the top two reasons this joint studio makes sense:
* Namco Bandai’s Ridge Racer 7 and Mobile Suit Gundam were the PS3’s best selling games in Japan last year, according to researcher Enterbrain, Sony’s Resistance: Fall of Man was third.
* And sales mean they stay in business. The games business generated 918 billion Yen ($7.59 billion) in sales (not profit) for Sony in 2006, 12% of total revenue.