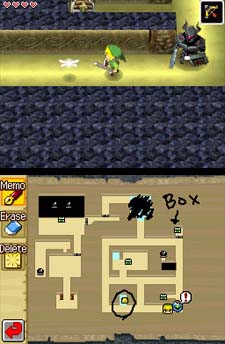 Thanks to jj984jj for translating this Japanese Nintendo Dream magazine with the director of the DS exclusive game The Legend of Zelda: Phantom Hourglass, Eiji Aonuma.

Question: How is the DS version going?

Answer: The DS version is coming along really nicely. It’s a small team of less than ten people, and while the rest of us were frantically scrambling to finish Twilight Princess, they have been quietly progressing with the DS game. I just played it yesterday, and it’s really good. It reflects the image of a team that was quietly burning with passion. Playing it by touch really pulls you in. By the way, the team that created the cut scenes for the Wii version was recently sent to work with them, and they’re creating some interesting event scenes that aren’t like Windwaker, but aren’t like the Wii version either. Controlling the boat with the stylus and writing notes on the maps is a really surprising experience, like, “I can’t believe we’re living in a world where this sort of thing is possible!” There are lots of things [in the DS game] that I wish I could have done in earlier Zelda games. So after Twilight Princess, I hope you will enjoy the DS game!

Question: Any idea when it will be released?

Answer: [Leaning back] Well! [Laughs] I can’t formally announce anything, but I think it would be great if we could get it out early in 2007.