Japanese magazine Famitsu interviewed the developers at Square-Enix behind the (Fabula Nova Crystallis) series of games made under the Final Fantasy XIII name. IGN translated the important story parts:

In the main FFXIII game, the world is split into two parts: Cocoon and Pulse. Cocoon is a space colony that houses a few million people. Pulse is everything outside of it.

For the people of Cocoon, Pulse is a frightening place. Those who come into contact with it are believed to be elements of a plot to invade Cocoon and are banished from the protections of the Cocoon realm by the “holy” government and its army. The original E3 trailer depicted a group of people who seemed to be confined on a train. These people had come into contact with Pulse and were being quarantined.

Cocoon is protected by crystals. This may not necessarily be the case for the rest of the games in the Fabula Nova Crystalis series, but the crystals in FFXIII are more than just shiny stones with magic abilities. They have the ability to create real life objects. They make life easy for people in Cocoon by creating machines and living creatures.

The relationship between Cocoon and Pulse can be thought of as this, according to director Motome Toriyama. First, there was Pulse, a dangerous world where people reside under the fear of monster attack. Cocoon was made when the crystals considered what would be an appropriate living space for people forced to reside in the world of Pulse.

Before reading on, watch the referenced FF13 trailer. A second trailer was shown to press behind-closed-doors last month, you’ll find a description of this FF13 trailer here.

As mentioned in this writeup on the second trailer, the female character who is assumed to be FFXIII’s main character is known as Lightning, although that’s not her real name. A battle expert with mastery of gun, sword, hand-to-hand, and magic based combat, Lightning knows little about herself. In fact, she’s not even sure of her real name, and Toriyama says that we should look forward to finding out the reason for this as part of the storyline. Lighting was once a high ranking official in an organization of some form. Now, according to the prologue that kicks off the trailer, she’s been selected as an enemy to all of man kind and will bring destruction to the world.

The trailer also served as the debut of a second character (shown below), a blonde-haired guy who speeds in on a motorcycle as Lightning finds herself surrounded by government troops. While the magazine doesn’t provide any details on this character, it does provide some surprises about his motorcycle. Famitsu reveals that the bike is a transformed version of Shiva, the water-based summon spell that makes a brief appearance in the second trailer. In FFXIII, Shiva takes the form of a sister pair, and both sisters are made up of bike parts, complete with a wheel behind the head. Toriyama wouldn’t spill the details, but hinted that you might be able to ride the transformed Shiva in battle, in addition to using it as a means of transportation when outside of battle.

At the beginning of the second trailer, as the main character speeds down a highway in the back seat of a car, he’s listening to a news broadcast on the radio. This broadcast describes how two countries have come to a treaty about peaceful use of crystals. Crystals have a different role in the Versus world, director Tetsuya Nomura explained to Famitsu. In Versus, crystals exist only in the main character’s country. A long cold war revolving around these crystals, has, as suggested by the news broadcast, at last begun to clear. 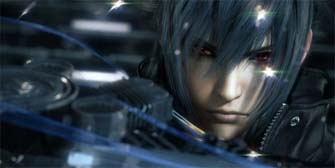 One point of interest in the trailer regards the main character’s eyes and features, which seem to change based on his moves. During battle, his eyes are red, and when he darts from place to place, his hair flashes white. Director Tetsuya Nomura revealed to the magazine that, while nothing has been confirmed, it’s possible that his eyes will change to other colors as well, including green.

Nomura offered a few hints on the kind of battle system we can expect from Versus. The trailer shows the main character selecting from a number of different weapons to defeat the hundreds of enemy soldiers that stand before him. The various weapons in the game will have different methods of attack, and some will even be usable as shields. Weapons will have some sort of customization element. Of course, the main character won’t have his full arsenal available to him at the outset of the game.

While everything we’ve seen of Versus so far has been CGI concept footage, Nomura revealed that we will at long last get to see the game running on actual PS3 hardware some time in 2007.