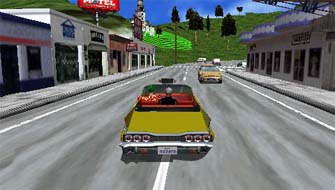 Sega today announced a new game in their Crazy Taxi series that first appeared in Arcades and on Sega’s Dreamcast console. Crazy Taxi: Fare Wars is in development by Sniper Studios (ex-EA) exclusively for PSP. The arcade-y racing game should be ready for a summer 2007 release date.

Using both original Crazy Taxi maps (Arcade and Dreamcast) and the Small Apple maps of Crazy Taxi 2, Crazy Taxi: Fare Wars offers an Arcade mode, where you earn time bonuses by delivering fares quickly, and a Time Trial mode, where the idea is to collect the highest fares possible in the time allowed.

On top of that there are two mini-game modes, including Crazy Box’s original 16 mini-games and a Crazy Pyramid to unlock the various Crazy Taxi 2 mini-games. The game will feature ad-hoc (local) multiplayer, that’s where the game likely got its “Fare Wars” name from, as it has you racing others and trying to steal their passengers by bumping cars.

In closing Sega allows you to record and save replays of your best moments to Memory Stick. You can check out more screenshots at Gamefront. Via Eurogamer, but the release date should be worldwide this summer.