UK’s PC Zone magazine issue #177 got the first details about The Elder Scrolls IV: Oblivion expansion pack titled “Shivering Isles“. Bethesda revealed to them that that the expected release date falls in the second quarter of 2007.

C&VG quotes the mag as writing the expansion will offer 30-plus hours of new adventuring, features new quests, monsters, expanded freeform gameplay – quest lines that branch more than before, for example – and a new land “that you can watch change according to your vital life-or-death decisions”.

Setting the scene, it’s explained that an ominous-looking gate has opened in Nibben Bay, the portal leading to a torn realm – the Shivering Isles – ruled by Sheogorath, the god of madness and dementia. Apparently, adventurers will meet the god and “plough through his trials”, but it’s additionally hinted that ultimately we may well be usurping the deity.

No word yet on what platforms the expansion will appear, but PC and Xbox 360 are safe bets, with a PS3 version to follow later. First screenshots in the magazine. 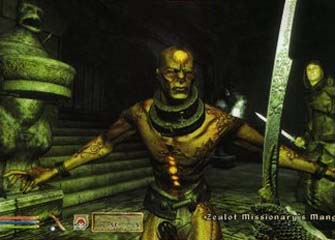