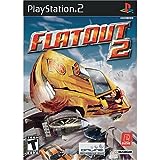 Bugbear Entertainment announced this week that since their crash-and-burn smash-em-up racer FlatOut 2 launched in June 30th 2006 in Europe (and August 1st 2006 in the US) it has sold half a million copies worldwide.

Published by Empire Interactive, sales of the FlatOut series on PS2, Xbox and PC has now topped the 1.5 million units mark. And they want to continue the game series on Xbox 360 with FlatOut: Ultimate Carnage (formerly Total Carnage), which is set for release later in 2007. No clue if itâ€™s a third game in the series or an improved port of FlatOut 2.

Bugbear had this to say: “FlatOut 2â€™s appeal builds upon peerless destruction driven by Bugbearâ€™s proprietary physics engine capable of delivering over 5,000 fully destructible objects on every track as well as 40 deformable parts on each of the 8 vehicles running and crashing side by side. Topped off by manic destruction derbies and the ever-popular Ragdoll punishing party games, FlatOut 2 delivers pure, unadulterated gaming fun.”

Take a look at FlatOut 2 in action:
Press release quote via Spong.