Marvel: Ultimate Alliance is an all-new action-RPG where players create their Marvel dream team from the largest roster of Super Heroes ever in an epic quest that will determine the fate of Earth and the Marvel universe.

If the names Spider-Man, Wolverine, Invisible Woman, Iceman, Blade or Ghost Rider ring a bell you might want to check this game out. 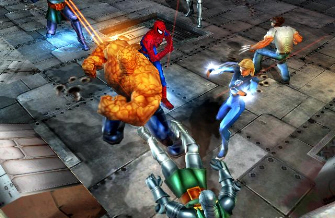 As mentioned, Marvel: Ultimate Alliance lets players create their Marvel Super Heroes dream team to take on an epic quest that will determine the fate of Earth and the Marvel universe. For decades, Earth’s Super Heroes have opposed evil in their own cities, and on their own terms. But now, Dr. Doom and a newly reformed Masters of Evil – the greatest collection of Super Villains ever assembled – have plans for world domination, and the heroes must band together to defeat them.

Playing as some of the most revered Marvel characters, gamers will embark on a dangerous journey across exotic terrain and well-known comic book locations like Atlantis, the Shield Heli-Carrier and the Skrull home world in an attempt to defy the world’s most notorious Super Villains. Created by Raven Software, Marvel: Ultimate Alliance lets players control the most powerful Super Hero alliance the world has ever known.

* Create…Marvel…Dream…Team!!! – Experience the full scale of the Marvel universe with a combined cast of over 140 popular comic book characters. Players create, customize and control their ultimate four-person strike team, selecting from an initial roster of 20 playable Super Heroes, including Spider-Man, Wolverine, The Thing, Captain America, Elektra and Thor – and battle notorious Super Villains including Dr. Doom, Galactus and countless others.

* Deep, Rich, Customizable – Marvel: Ultimate Alliance offers gamers total team customization. Players can form their favorite Marvel dream team, create their own team name, team icon, team vehicle and establish a team reputation as they play through an original storyline hand crafted by renowned game developer Raven Software and Marvel’s own C.B. Cebulski. Additionally, players have more control over leveling up each team member to their liking, or upgrading all team members together to keep their heroes balanced.

* Combat, Combat, and More Combat – With new and dynamic combat capabilities, Super Heroes can now fight while airborne, on the ground, and even submerged underwater as they traverse through 17 exotic locales and play out some of the most legendary comic book battles from the Marvel universe. Players will have access to a host of fighting tactics and accessories, including melee combat moves such as grappling, blocking and quick combos, new chargeable Super Hero powers, more environmental objects that can be used as weapons, and unique one and two-handed weapons.

* The Fates – Marvel: Ultimate Alliance features a unique storyline where players not only determine the fate of Earth, but also control the fate of the Marvel universe. The missions players accept, the objectives completed, and how players interact with other characters throughout the game will have a direct impact on how the story plays out.

* …Indivisible, with Liberty, and Multiplayer for All – In addition to the epic single-player storyline, players can also battle the world’s most evil Super Villains alongside friends in the cooperative story modes. This robust multiplayer component also features a Competitive Mode – where the game keeps track of various in-game stats so players can see how well they stack up against one another – affecting the amount of experience points and how equipment is distributed.

How much fun is Marvel: Ultimate Alliance on a scale from 1 to 10?

FUN FACTOR – 7.5
Marvel: Ultimate Alliance is a game that has more than 140 Marvel characters appear in some form or another, with more than 20 playable characters. The action-RPG features a deep lengthy gameplay experience by offering total team customization, where players create their own team name, icon and vehicle, as well as establish their team reputation as they play throughout the story. While other next-gen consoles have online multiplayer, the Wii version only has local multiplayer for up to four players at once, which is pretty awesome on its own to play co-op like that. The expressive new style of Wii controlled gameplay moves has the power to make just about anyone with a slight interest in the Super Hero genre to turn their head, act out some moves, and if they don’t feel the controls are tacked-on, the story and action in it will take care of the rest.

Graphics – 7.0
The textures and overall low-resolutions visuals make the game look like a GameCube port. There’s a great variety in environments. You can’t beat the awesome designs of loads of famous Marvel Super Heroes all put together with great art direction and fantastic CGI cutscenes in one game.

Audio – 7.5
The story is was penned by C.B. Cebulski, who has helmed various X-Men and Spider-Man books throughout the years. So the plot is true to the series, includes sometimes cliche lines. The cutscenes have great voice overs. The uplifting music adjusts itself to what’s going on in the game. Solid sound effects too.

Ingenuity – 7.5
Customizability appears to be a theme for the game, as players will be able to create their own team name and vehicle, level up characters individually or as a group, and go into a fight bare-fisted or wielding improvised weapons plucked from the environment. It’s all easy to pick up thanks to the fluid Wii Remote controls that make you feel like you’re becoming one with your heroes as you team up with others and execute every Super Hero’s unique power moves. Motion-sensitive controlled moves include special attacks, unique for each character, and access to any special move at any time. It’s a genuinely well balanced control scheme that makes playing easy and fun. Because the controls take a while to get adjusted to, you’ll probably hear nay-sayers mention they think the controls are novel, maybe even gimmicky, but keep in mind those same people are perfectly happy with the repetitive button-mashing to beat down all the groups of grunts on the other console versions.

Replay Value – 7.5
Expect to be playing the game up to 20 hours. There’s quite a bit of replay value since the game has alternative endings. These depend on the number of optional missions the player(s) completed. Also included are trivia, artwork and “simulator discs”. The discs unlock non-story related missions for characters and pit them against a variety of villains. Each character also has a variety of costumes that offer various advantages. So there’s lots more for you to collect and try out after you beat the game once.