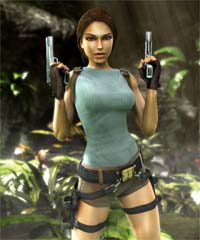 “Sometimes to understand your present, you have to go back to your past. And this time, things will be different!” Lara Croft says in the first trailer of her upcoming spring 2007 remake of her first adventure ten years ago titled Tomb Raider: Anniversary.

Crystal Dynamics is developing the game inspired by the original, but using an enhanced Tomb Raider: Legend game engine and will be released on PC, PSP and PS2. Also included will be some multiplayer features that are still being ironed out. Trailer here:
The game will follow the same basic story as the original, so you’ll once again be guiding Lara as she’s commissioned to retrieve an ancient relic known as a “scion”. As anyone who’s played through the original game can tell you, while the gameplay was aces, the story wasn’t big on making sense once you started progressing. As a result, Crystal is fleshing out the narrative to offer some clarity on what the heck is going on.

Lara’s radial inventory wheel is back, as is the simple tune that plays when you discover hidden areas. One thing to note about the Anniversary Collection’s mechanics is that they’ve been opened up some to include elements introduced in Tomb Raider: Legend such as the grapple, context-sensitive actions, and the cinematic button-pressing moments. 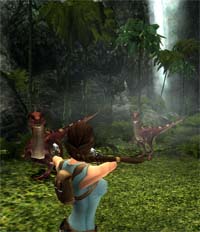 Gamespot reports that as far as gameplay goes, the level demoed to them showed off the revamped first level of the game, which, as in the original, revolved around a gear puzzle that required you to collect cogs to make an ancient clockwork gear system work. In the new game you’ll be doing this in a vast cave made of up of interconnected passages that crisscross each other.

More significantly, the rather plain gears that fit into pegs on a wall in the original have been replaced with proper gears carved into a good chunk of the cave wall. The hunt for the cogs also featured the return of familiar animal foes such as wolves, bats, and some Jurassic surprises.