Red Steel is set in modern-day Japan. Players will master both the ancient art of the katana and the sophisticated technology of modern firearms.

Red Steel was the first game for the Wii to release in-game screenshots, and the first third-party game (exclusively) in development for the console. While it was very hyped and promised to take advantage of the motion and immersive gameplay possible only with the Wii’s remarkable controller, does it deliver on that promise? 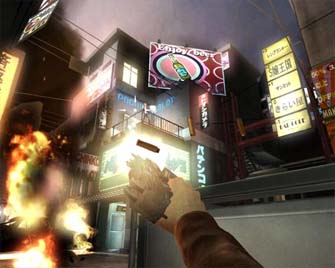 The storyline unfolds as you learn that your fiancee has been kidnapped and her father –- a Japanese mafia kingpin -– murdered by a rival gang. The only way to save your loved one and defend your honor is to journey from Los Angeles to Japan and confront the Tokyo underworld.

Red Steel’s main features include:
* Exclusively for the Wii: Red Steel is the only original first-person action game built from the ground up for the Wii.
* Player takes complete control: Take full advantage of the Revolution controller, and control the action like never before. You’ll replicate sword-fighting movements and eliminate enemies quickly by directly targeting and shooting them.
* Master the deadly steel: Execute deadly combo moves using multiple swords or choose from a variety of firearms for longer-range attacks.
* Focus is key: Learn to harness your mental power to unleash powerful attacks in dire situations, and use the “focus system” to freeze time and effectively target several enemies at once.
* Become a modern samurai: Learn the art of Japanese fighting, and then use these skills to take out your enemies or gain their respect and loyalty by sparing them.
* Multiplayer modes: Challenge friends with various split-screen multiplayer modes to see who the real master is.

In the single player story mode new gameplay aspects come into play, where the AI allows the player to force the enemy mob bosses to surrender, rather than take their lives. The player can shoot the weapon out of the enemy’s hands, causing him to surrender. In the swordfighting aspect, a similar option exists. After winning a swordfight, the enemy gets on his/her knees and the player has the choice of whether to deliver a coup de grace or to show mercy. This actually becomes beneficial, as the bosses may then help the player if the player can convince them to join the player’s faction, possibly handing over new weapons or paths. A violent approach is also possible, but it may result in the bosses’ factions joining Tokai (instead of the player) in his quest for Yakuza control, making the final confrontation with the mobster more difficult.

Recklessness is strongly discouraged by a system that adds ‘freeze points’ for accuracy/efficiency while using one’s weaponry. When a certain number of points is accumulated, the player is able to momentarily freeze time thus allowing for more accurate attacks.

In multiplayer up to four players can play together through split-screen on four different maps: Dojo, Restaurant, Games, and Docks. The three multiplayer modes are:

Deathmatch: each player fights for himself and must kill as many people as possible to win.
Team Deathmatch: the players are in two teams. The team with the most kills wins.
Killer: each player fights for himself or herself. This mode consists of rounds. At the beginning of each round, each player receives a secret objective through the speaker of the Wii Remote. The objectives are private. A timer is set that defines the duration of the round. The first player to complete the objective wins the round. Depending on the difficulty of the round, players will be rewarded by different quantities of points. Killer mode is only playable with four players.

FUN FACTOR – 5.0
The controls in Red Steel are a novelty, without the Wii Remote you would not be playing this mediocre FPS. Multiplayer is unwieldy, because even if you have the patience yourself to get used to the clumsy controls and play through the single player campaign then you’re going to have to explain to a friend that it will only take a few more hours to get used to them, at which point you’ll both realize how that remark sucks all the fun and energy out of the room and you’ll leave to never return to the game. At least, that’s what happened in my house. I love the Wii and I wanted to enjoy this game, but as a buggy tech demo of the Wii’s potential, the underlying gameplay wouldn’t let me enjoy the experience. Rent the game if you’re on the fence, or taken in by all the hype, but don’t buy it. Call of Duty 3 definitely is the better Wii launch FPS here.

Graphics – 7.0
The graphics look ok, the Unreal Engine 2.5 and PhysX Physics Engine do their job and the volume lighting can be quite spectacular at times. Special effects like the excessive explosions all over the place are great. The slow-motion effects are cool too. Animations are rather stern. While it doesn’t always run at a smooth 30 frames-per-second, overall the visual look is crisp. One thing I never understood was why the game is called Red Steel when there’s no blood in the game?

Audio – 7.0
The mix of J-Pop, rock and orchestral music sounds good. Sound effects from the weapons are suitable. There’s lots of voice over chatter mingled in with the game and cutscenes, but it’s all pretty horrible, the characters don’t even sound genuinely Japanese.

Ingenuity – 5.0
The Wii’s motion-sensing controls are used so you can hold swords and guns, but the execution feels rushed and is flawed to the point of becoming unwieldy. At first it’s fun to shoot at fishtanks, hold your gun gangsta-style, and make the enemy submit to you after swordfights, opening doors with a knock, throwing grenades with a throw, saying “yes” or “no” by nodding the Wii Remote and so on. But soon you’ll realize the excitement fighting against the yakuza is lacking as you progress and the game gets harder. You see, the controls never light up. Sure, aiming works fine and it can be fun to pull off headshots, but the major “but” lies in the fact that you can’t turn from left to right without dragging your screen there with the reticule. This means that your response time in heated shootouts goes down tremendously and it destroys the fun the controls might’ve otherwise offered.

The AI aren’t the smartest of the bunch either, if you hide behind any object they won’t see you, then you come forward and they spot you, but then after seeing your location and you hide behind an object in their same line of sight, they act all “Where is he?” again. While sometimes they’ll take good cover, other times they’ll run right past you, it’s pretty on and off. The glitches and bugs in the game don’t make it any better when you see enemies frozen or floating.

Replay Value – 5.0
I can’t recommend it for its multiplayer experience. There’s some fun to be had in the single player mode, but don’t expect it to last longer than 10 hours. Since there’s no difficulty setting for you to change, there’s hardly any replay value.

Update: Five months after release, it was revealed that Red Steel sold nearly a million copies, and as a result a Red Steel 2 sequel was confirmed for Wii due late 2008.