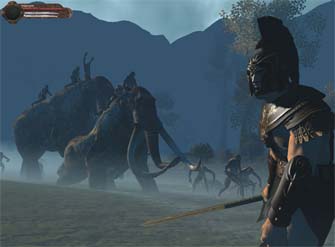 We suspected it half a year ago, but now it’s official. Funcom has announced that its Massively Multiplayer Online game, Age of Conan: Hyborian Adventures has been given the green light from Microsoft, meaning that development can now commence on an Xbox 360 version.

Age of Conan is a showcase PC title for Windows Vista (expected for March or May of 2007 release), and multi-award winning game (it won no less than four “Best MMO of E3 awards”). Here’s a trailer:

Funcom are the developers behind previous hit MMO Anarchy Online, a sci-fi universe that rivals PSU in the size of its fanbase, and offline adventure game, Dreamfall.

To quote: “This is a groundbreaking leap forward for Funcom. The fact that we now get the chance to develop â€˜Age of Conanâ€™ for the Xbox 360 means access to a potentially whole new and large MMO market,â€ said Trond Arne Aas, CEO of Funcom. â€œThe fast-paced and innovative combat system in â€˜Age of Conanâ€™ will suit the demanding console audience perfect. We believe the amazing online capabilities of Xbox 360 will be a great match for MMOs like â€˜Age of Conanâ€™, and as one of a handful officially approved MMO games for the console we aim to create a unique, brutal and powerful online gaming experience.”

The storyline of the game goes a little something like this:

In a world filled with cruel gods, mythical creatures, lost civilizations and a struggling human race, the mighty barbarian has finally seized the throne as king of Aquilonia. But Conan’s rule is on the brink of chaos, spiraling towards the doom of ancient evils. In this twisted fantasy world, dark magic and brutal combat lurks around every corner, and each man and woman must carve their own unique destiny under Conan’s reign. In the true vision of Robert E. Howard’s dark universe itâ€™s now time for you to become a messenger of death.

One question remains: Will it be cross-platform?