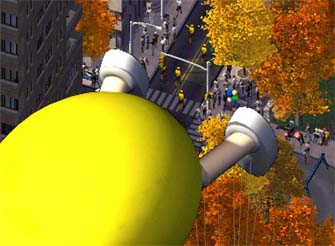 Ongoing New York City recreation project in SimCity 4. From the The Statue of Liberty, the Empire State Building down to even the cabs. Every little detail of the Big Apple is being transfered into the game at the NYC journals.

The above screenshot displays the Macy’s Thanksgiving Day Parade. One of the M&M guys (Yellow) makes his way down Central Park West as his handler’s try to avoid getting the lines snagged on stoplights and street lamps. Isn’t it amazing they’re able to pull that off. Via Digg