Assault Heroes is the Xbox Live Arcade release this Wednesday 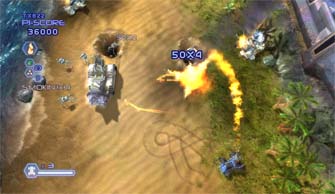 Microsoft announced that Assault Heroes [sub-site not live yet at time of posting], a vehicular combat action game, developed specifically for Xbox Live Arcade will arrive tomorrow on Wednesday. The game will be available for download worldwide on Xbox Live Arcade for Xbox 360 after 0800 GMT (1AM PST), at a price of 800 Microsoft Points (that’s $10 / â‚¬9.60 / Â£6.80).

As the only surviving members of an elite Special Forces unit, it is up to you to find the secret underground lab. Go the mission alone or fight side-by-side with a friend in the two-player cooperative mode. Navigate your heavily armed 4×4, speed boat or travel on foot and blast your way through enemy-infested territory. Prepare to be assaulted by waves of formidable enemies with unrelenting attacks.