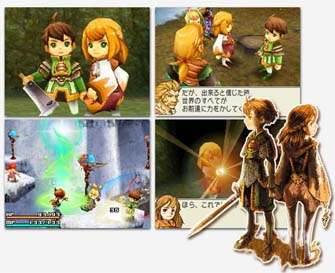 Square Enix has finally revealed some Final Fantasy Crystal Chronicles: Ring of Fates DS details. You can see the first screenshots above in bigger size by clicking on the image. After looking at the Japanese FFCC:ROF website, the Engrish translator brings up the following:

* The action RPG Final Fantasy Crystal Chronicles: Ring of Fates is set for release on Nintendo DS in 2007.
* The (serious) destiny is assigned to a boy & girl called “the twins in the axis”.
* At the Crimson (month), where the magnificent story takes place, the green crystal is put together.
* At the meeting place four races (who have the efficiency which) differs from the single mode, where they can enjoy the opening of the story are worked. The multiplayer mode, which captures Quest, can be played with a maximum of 4 people.