RoboBlitz is the Xbox Live Arcade release this Wednesday 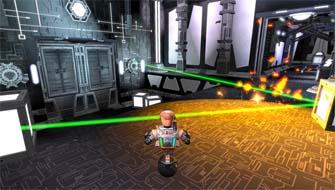 Experience the power of the Unreal Engine 3 for the first time in an Xbox Live Arcade game in RoboBlitz, this weekâ€™s Xbox Live Arcade Wednesdayâ€™s release. The game will be available for download on Xbox Live Arcade for Xbox 360 beginning Wednesday, December 6, after 0800 GMT (1AM PST) at a price of 1200 Microsoft Points (that’s $15/ â‚¬14.40 / Â£10.20).

Independent developer Naked Sky Entertainment created RoboBlitz using the latest in game technology to deliver an innovative, high definition experience. RoboBlitz is a fast-paced, 3D action game with unique physics, inventive gizmos, creative weapons, and robotic characters. Players take on the role of Blitz, a multi-talented robot who must activate an aging space cannon to save his world from a band of maladjusted space pirates. Set in seven distinct environments, RoboBlitz features 19 levels of puzzle-solving and high-intensity, action set in 7 unique environments.