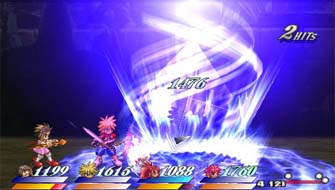 Bandai Namco is developing another Tales game on PSP (1 of 3 actually) for release in Japan. Jeux France has the first screenshots of the PS2 (2002) game port Tales of Destiny 2. Unlike Tales of the World, this game features old school 2D graphics. However, with beautiful sprites and cool battle animations, Tales of Destiny 2 could look quite stunning on the portable screen.