Home » News » 21 Wii tips and tricks for the console and games (turn the blue light on!)

21 Wii tips and tricks for the console and games (turn the blue light on!) 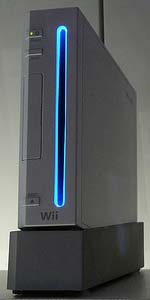 We listed the top 10 Wii facts, then the top 12 other Wii facts, continued with 16 secret Wii facts. All facts you might not have known, so it’s only fitting we continue this trend with 21 very handy tips and tricks for Nintendo’s Wii.

1. Press the home button on the main menu. Next, click on the controller image. You can adjust the Wii-mote volume and rumble functions.

2. Hold A and B down and you can move the windows on the main menu around.

3. Want your plain-looking Wii to have some style? Add a blue light around you CD drive anytime the console is on by doing the following:

Go to your email from the home menu, and add your personal computer email address to your address book. Wait ~1 hour for the email (mine took at least this long) Reply to the email from your computer. In a few minutes, you will have an email waiting for you on your Wii. Don’t read it! As long as it remains new, you have a pretty blue light!

4. While your Wii is powered down you can press any button on your Wiimote and lights will flash. The number of lights flashing is the amount of charge left in your battery (1 is least charge, 4 is most charge).

6. In order to add someone to your friend’s list you BOTH have to enter each other’s Number ID and Console Nickname to be able to send messages and Mii’s.

7. When looking at your messages press A and B and you can move the messages around. If you have a lot of messages like me then you can arrange them in this manner or you can just delete them.

8. Extra Parts: There are two parts to the Wii in your box that you may either not find, or never know what they are. The first is a Clear Disc piece. This piece fits under your Wii stand to stabilize its balance. The second is a Small (1″ – 1.5″) plastic Piece. This piece is the stand for the Sensor bar. It puts some distance between your TV and the bar. In theory, that should give you a better angle reception.

9. Get Miis in your parade: Setting your Miis to Mingle and having your friends do the same thing will soon have Miis walking around in your parade. Your friends’ Miis will wonder over to your console and parade around, so long as they are set to Mingle. You can then grab them and send them to your Plaza so you have a copy.

10. In the Wii menus, turn your wrist and the hand cursor will also turn.

11. When you purchase a virtual console title and Mario runs across the screen, if you happen to get Fire Flower Mario, you can shoot fireballs with the A button.

12. If you go to the Channel section in your menu you can choose to save Virtual Console games on a SD card.

13. Wii Video 9 is a free video conversion application developed by Red Kawa. It allows you to convert your computer video files (like avi, divx, mpeg, etc.) into the specific video formats that are playable on the Wii.

Wii Video 9 can also be combined with Videora, another software application, and together they can let you automatically download and convert video for your Wii using BitTorrent and RSS technology.

14. Get rid of Generic Teammates/Spectators: The Wii will automatically use the other Miis in your Plaza as teammates and spectators in certain Wii sports games. Create friends and family, and you can get rid of the generic Miis.

15. In Wii Sports Bowling, when you press up on the Directional Pad, it will zoom in on the lane. The zoom in sound is the exact same sound from Super Mario 64 anytime you moved the camera.

16. On hole 3 of Wii Sports Golf, there is a small section of fairway at about a 45 degree angle to the left from the tee box. It is a small patch surrounded by Out Of Bound-ness. If you can land your ball on there, you can easily make it on the green in 2, to Eagle the course.

17. In Zelda if you keep the game at the start screen for an extended period of time, it plays an extremely extended trailer that they didn’t show to the general public which is pretty cool.

18. In Zelda, the direction Link spins when doing a spin attack depends on which way you spin your nunchuck controller attachment.

19. You can skip cut-scenes in Zelda by hitting the – button.

20. Register and Extend Warranty: Register your Console on Nintendo.com, get a free 90 day extension to your warranty.