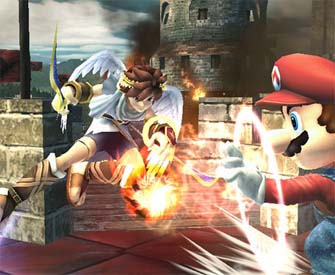 More new Super Smash Bros Brawl pictures can be found on the official SSBB page. Masahiro Sakurai, the director of Super Smash Bros. Brawl, updated the page and had this to say:

“So, the Wii has launched. Are you enjoying it? As I sit here writing this, it has not yet released where I am, but I am enjoying it nonetheless! …But not as a consumer. No, I am working with it as I continue with the development of Super Smash Bros. Brawl. All of us on staff are working very hard, but it will be a little while longer before you can play it!

This time, on the movie page, I have added the Super Smash Bros. Brawl movie we created for the Nintendo World 2006 Wii Hands-On events in Japan. Please take a look.” The trailer that unveils more moves & Fox can be seen below.

Good to see the game being reaffirmed for 2007. With it being a year away, you have to wonder how many more videos unveiling an extra character, they will show 😉 Seriously though, Super Smash Bros. Melee on GameCube had a character roster of 25 and so far only 10 Brawl characters have been revealed. We’ve got a long way to go.