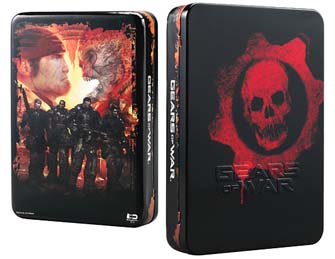 At the moment Amazon is selling the Gears of War Collector’s Edition for $57.99, eventhough the normal (just the game) version costs more at $59.99. Gears of War was released in the US two weeks ago and is the first third-person tactical action/horror game developed by Epic Games exclusively for Microsoft Game Studios’ Xbox 360.

So what extras do you get in the Collector’s Edition?
* Everything included is enclosed in a collectible metal box shown above.
* Destroyed Beauty, the Gears of War hardbound art book.
* Bonus special features DVD, including:
– An inside look at the making of Gears of War;
– The â€œArt of Gears of Warâ€ trailer;
– Gears of War: The Race to E3.