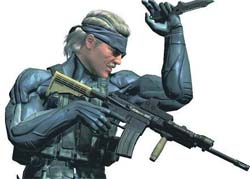 The Official Playstation Magazine (OPM) in the UK recently did an interview with Hideo Kojima, head of Kojima Productions, creator of the PS3 exclusive stealth game Metal Gear Solid 4: Guns of the Patriots. Prospecter at MSG.org typed it out. The game won’t just take place in the Middle East, but will travel the world. Also interesting is that the GEKKOs (yes the mechs that moo like cows) won’t always attack Old Snake…

OPM: We noticed in the new MGS4 trailer that Snake seems to be shooting soldiers from both sides of the conflict. With graphics getting more realistic do you feel that the moral aspect of gaming is going to become more important?

Kojima: Well, this time Snake has his own rivals and destiny so he’s in a battlefield but sometimes the people there don’t have anything to do with him. So yes, there’s a moral aspect to what Snake should or could do to others that are not really involved in his actions. It’s up to the player, and that’s a deliberate theme this time.

OPM: Does this freedom to make moral choices reflect how people approach Metal Gear games in different ways – with some people blasting through and some using stealth more – or is it just a reflection of the morally murky way wars are being fought now?

Kojima: There are three aspects to this. Firstly, there’s the real world changing as it is now with the Americans going everywhere and creating war. Secondly, there’s MGS4’s theme and plot, which has something to do with this. And the third aspect is that while MGS has always been a sneaking mission, FPS shooting is a trend and I really wanted to give players that freedom this time. I also want players to discover their emotions about how war changes life and people. You may decide to stick with nation ‘A’, or ‘B’ in the game’s war, or you could destroy both. You could also choose not to ally with either country. There are not political issues involved for Snake. You don’t have to kill the enemy, but you might decide to. I want people to understand that kind of feeling – killing someone you had no intention to kill. These days, with any FPS you’re either on side ‘A’ or side ‘B’ and you’re killing, killing, killing, but my games shouldn’t be like that, and that’s why I have this big theme. Of course, this is still a game and I don’t people to be sick every time they shoot an enemy.

OPM: The original tagline for MGS4 was ‘No place to hide’, and yet the more wee see OctoCam it seems that, now, potentially everywhere is a place to hide. To what extent will gamers be able to come up with creative places to stow away?

Kojima: In the MGS series there has always been some obstacle or other that you could hide behind and not show your body so you wouldn’t get spotted. This time it’s not like you hide somewhere – its more that you’re in sight but out of sight in the battlefield. You’re out of attention, so to say.

OPM: Can you expand on that?

Kojima: To use a funny analogy – in the past, the MGS series was like a bank robber trying to rob a bank at night; so there are guards, cameras etc. And when you get spotted you’re instantly known as the robber. But in this game, you’re going into the bank at midday. You might just be a customer going in to make a deposit, but you still have to sneak in to accomplish your mission. So you’re trying to deceive. You’re on camera, so if you do weird things you’ll be spotted as the robber, but if you don’t you won’t. Its more about deceiving the eye. I can’t really reveal the top secrets but we [the development team] did our training camp in the mountains as we always do, and this time we had that kind of training: deceiving the eye, or crawling unseen while you’re in view. That’s what we did for MGS4.

OPM: In the first MGS4 trailer (see the video at the start of the interview) we saw an aging Snake inject himself with something. At the end of the trailer we see what looks like a younger Solid Snake: is that him having reversed the effects of the serum or not?

Kojima: I put that in there because I wanted you to think about it, but its not something you will actually know until you play the game.

OPM: Can you tell us how the new bipedal cyborg Metal Gears will impact on the gameplay? They appear to operate in packs…

Kojima: It’s not necessarily about Snake vs. these Metal Gears – the GEKKOs (Japanese for ‘Moonlight’). Sometimes GEKKOs will spot you as you’re the enemy, but sometimes you’re not necessarily the enemy to them. This means that is might be nation ‘A’ vs. GEKKO and Snake can walk right past them. There will be some situations like that, and vice versa.

OPM: We know the Middle East features in MGS4 and you’ve said you want this game to be like James Bond with Snake traveling the world. Is there any chance he’ll visit the UK?

Kojima: Unfortunately not. I want to go there, actually. But not Snake – not this time. Officially, the new locations are somewhere in the Middle East, somewhere in South America and somewhere in Eastern Europe.

OPM: What prompted you to start motion-capturing real actors in MGS4? I understand you had you had a Japanese actress, (Yumi Kikuchi) on the stage, and demonstrated how she was scanned for use in the game…

Kojima: I cannot really say specifically as it would spoil MGS4s plot. However, I can just hint that one group in the game will use an actual skeleton and skin texture, and that’s why we needed it. Of course, for Snake and Otacon we don’t have real models. They are created, so there is a risk it won’t work if you put the real actress or actors next to these people. However, we’re thinking about how to make it a natural fit.

OPM: Is it important to the plot that this group looks different?

OPM: Was Ms. Kikuchi happy with her likeness?

Kojima: I hope she was happy. It’s still a work in progress. What you saw was that we created a pure core of Ms Kikuchi the actress. She’s not going to look like that in the game. She’s going to be quite different. so don’t think we’re going to use it for promotional use like Capcom did with Takeshi Kaneshiro in Onimusha. We’re not going to use her likeness like that.

OPM: What are your feelings about the PS3s new Sixaxis controller and the loss of the Dual Shock 2’s rumble?

Kojima: We can’t say how we’ll use the motion-sensing functionality specifically but we’ll use it for sure. The controls in MGS3 got a little complex, so you’ll have a little more direct control in MGS4. That said, I miss the rumble, and even now I hope it will come back.

OPM: If we sneaked into the Kojima Productions offices now, what would we see? Would we be able to play anything?

Kojima: We’re finally out of the research stage. We’re now at a point where the system if finalized and we’re saying ‘lets go with this’. So the gauge and icons are there, but they’re still temporary, meaning the design is still not fixed. Of course you can play, but we’re still experimenting. If you go to one section you might play with the AI and enemies, while in other areas you can play around with the cameras or the background.

OPM: Last time we talked there was some discussion that you weren’t sure how best to incorporate Snake’s little robot friend [The Metal Gear Mk.II], but now we see he’s back in the game. We saw him electrocuting someone in the plums in the trailer. How will he work in the Guns Of The Patriots?

Kojima: That’s because you mentioned it. I remember that interview. You don’t just electrocute people in the nuts, though. That’s in the trailer as a kind of a message that you can do something interesting with the Mk.II.

OPM: So, are you saying that you can control the Mk.II in MGS4 yourself?

OPM: People in the UK always find people hit in the nuts very funny, so we’re sure it will go down well.

Kojima: In France, its always the shit part – the doo doo [laughs].

OPM: Picture the scene: MGS4 has shipped to rave reviews and its selling strongly. Its your first day back at work. Whatâ€™s the first item on your ‘to do’ list?

Kojima: If MGS4 sells, then its on to the next concept, which I have really wanted to do for a very long time. If it fails, I will probably start writing a letter to announce that I am leaving this company. That’s what I kind of want to do, actually. [Kojima pauses] That’s a joke…