Small Arms is the Xbox Live Arcade release this Wednesday 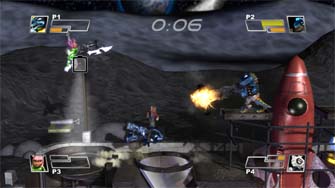 That’s right, not a classic, but an original game hits the Xbox 360 download service this week. Small Arms is the latest Xbox Live Arcade Wednesdays release. The frantic multiplayer brawling game will be available for download on Xbox Live Arcade for Xbox 360 beginning Wednesday, November 22, after 0800 GMT (1:00 a.m. PST) at a price of 800 Microsoft Points ($10 / â‚¬9.60 / Â£6.80).

Social gaming innovation in Small Arms, which begins with the four developers at Gastronaut Studios, will pass to Xbox Live Arcade gamers from around the world. Small Arms includes a unique social networking Achievement called â€œSix Degrees of Small Armsâ€ that can only be earned by playing with someone who already has it â€“ and which only the gameâ€™s creators will possess at launch!

In Small Arms up to four players can join in the battles across many dynamic and richly detailed levels. Gamers can choose from a cast of outrageous fighters like the cyborg tabby cat, assassin truffle pig and mutant chimney sweep. While jumping from platform to platform shooting with 360Â° aim, gamers of all skill levels will be able to pick up and play this innovative side-scrolling action title.