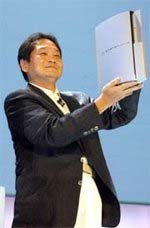 Newsweek‘s Steven Levy did a great interview with the creator of all PlayStation generations, Ken Kutaragi. He talks about PS3 games becoming superior within a year, the PS3 delays, the PS3 as a multi-terabyte network audio/video storage TiVo, and that waiting is the best way to get a PS3.

Question: You believe that when game developers learn the system, PS3 games will be superior. When will we see the difference?
Answer: Maybe within a year. Many of the launch titles already have some of the graphics and the power there. But [titles like] MotorStorm and Ridge Racer and Gran Turismo are going to be released within a year, and that quality is exciting.

Question: Why did you need Blu-ray HD drives for this?
Answer: Everyone will soon have elegant flat displays for HD contentâ€”PS3 and the high-definition movie media. The Blu-ray has 50-gigabyte capacity, and many studios and other DVD makers are now supporting Blu-ray format.

Question: Didn’t adopting Blu-ray cause you delays?
Answer: Yes, that’s right, because the PS3 contained the latest technologyâ€”Blu-ray, Cell, Sixaxis and many things. The Blu-ray had the manufacturing problem. As the father of the PlayStation, I have to apologize to all of the users and the readers who are waiting for PS3. But everything is fixed.

Question: Are you worried about the high cost of PS3 of $500 and $600?
Answer: I don’t think so, because the PS2 was originally $299 in the United States. But the hard-disk drive was another $200. So the total price was almost equal to PS3’s initial pricing. 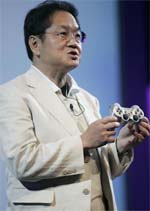 Question: After Howard Stringer took over Sony in 2004, you were relieved of some general Sony corporate duties and returned full time to your division. What was your attitude toward that change?
Answer: I still am an engineer and a designer, so being the creator is my happiness. I’ve dedicated 120 percent of my life and passion [to PlayStation], so it was very happy timing. And Howard Stringer leads the management team, and now they are taking care of day-to-day issues so we could concentrate on the PlayStation.

Question: Do you envision people using PS3 as a home-media server, like a giant TiVo for people’s movies, TV shows, music and personal content?
Answer: Yes. Maybe in the near future, either from Sony or maybe from third parties, we will release a network storage system that contains multi-terabyte capacity.

Question: So it could be the hub of the media center in the house.
Answer: The media tree. That was my dream, so the dream has come true. They sent out one of the PlayStation 3s to my home, so I happened to realize [my family members] are watching their photos and they are ripping music, and the experience is quite elegant, quite fast and comfortable. I have no idea how to use the current PC for that kind of application.

Question: What’s the best way to get a PS3 if you’re not on the list?
Answer: The best way is waiting, but maybe you have some lucky friend who can get the PlayStation 3. So please visit your friend’s home to share and enjoy future entertainment.