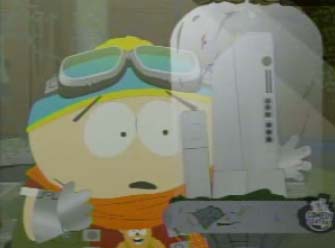 Last week, in an attempt to make his wait for the Wii instantaneous, Cartman froze himself. Through a bizarre twist of fate, he woke up 500 years in the future, where there are warring factions, some angry sea otters, and worst of all: No Nintendo Wii!

Will Cartman get out of this crazy future? Or will he be doomed to never get his hands on the Wii? Find out in the latest South Park episode “Go God Go XII” which was of course filled with offensive language/imaging and memorable quotes such as “I’ve been waiting 500 years to play the Nintendo Wii and if I don’t play it real soon I’m going to bust a nut!”
At the very end of the episode, several real games can be seen, including Blizzard’s Diablo 2.