This summer Sony created a training website for Canadian Wal Mart employees. The access codes got leaked when a store visitor saw a manager put up internal documents around the store.

After logging in, Sony marketing spin quotes can be found while employees read, learn & test their PS3 knowledge. Here’s the real gem:

“Welcome to your PS3 Retail Online Training. We trust that you will find the following information valuable and assist you in understanding and explaining PS3 Technology to your customers and staff. … The Cell Processor is essentially as powerful as 3 Xbox 360 CPUâ€™s or 35 PlayStationÂ® 2 CPUâ€™s”

And you wonder why store clerks so seldom know what they are talking about? How in the world is “The Cell is actually 7 SPUâ€™s (Synthetic Processing Units) each running at 3.2 GHZ” supposed to inform customers? Here’s a screenshot (click to enlarge) of one of the tests where employees can win prizes if they get all the answers right. 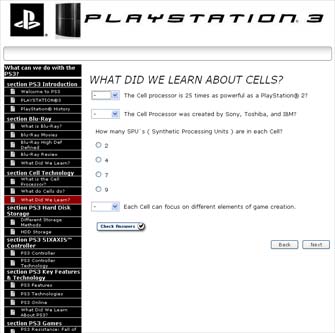 Oh and by the way, most developers say that the horsepower inside both the Xbox 360 and PS3 will be comparable a few years from now as it’s all about what they can get out of their processors to use in-game. That’s a good thing and also why Gears of War look prettier in graphical detail than any PS3 launch games shown so far.

A direct quote from Silicon Knights president Denis Dyack says: “The 360 and the PS3 are equal in power in my eyes,” Dyack says. “Maybe the PS3 has more processing power. The 360 has more available memory. It’s pretty much a net, net. The public perception of the PS3 was that it was much more powerful. To developers, they look even.“