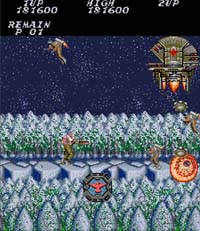 Use veteran Special Ops soldiers Bill Rizer or Lance Bean to battle the alien menace Red Falcon and all of its minions. Fight through the jungle, frozen tundra and steel fortresses in 8 challenging game levels. Gamers depend on high-tech weapons including the Mini Laser, the Fireball and the Spread Gun in their fight to protect the world.

Game features:
* Players can opt to play the original arcade game or play in the enhanced mode with improved graphics and sounds.
* Xbox Live Multiplayer: Battle all 8 levels cooperatively over Xbox Live, or locally on the same console.
* Xbox Live features: Players can see how they rank against their friends with worldwide leaderboards and achievements.
* 12 achievements: Contra offers achievements which range from straightforward to challenging for players of all skill levels.
* New visuals: Enjoy enhanced artwork including rendered new bullet effects and explosions.
* Konami Code: up, up, down, down, left, right, left, right, B, A.

Beginning in January 2007, Atari will release six titles on Xbox Live Arcade throughout the year. Both classic and evolved versions will be available for each of the following titles:

Centipede/Millipede: defend your village against an onslaught of centipedes, spiders, army ants and more. In addition to the classic mode, the evolution mode offers high definition graphics and special effects like motion blur, trails and particle-based explosions to make the experience as enjoyable today as it was decades ago.

Battlezone: the original tank vs. tank action classic has received an Xbox Live overhaul, adding in exciting new multiplayer modes including Deathmatch, Team Deathmatch and Capture the Flag. This updated version is truly a must-have for any fan of the original, which is also included. Additionally, players can use the Xbox Live Vision camera to watch live video of their opponents. Combine these features with new special effects for weapon firing, impacts and explosions and you have one killer classic as you’ve never experienced it before.

Asteroids/Asteroids Deluxe: rotate, thrust, flip, fire and jump to hyperspace as you blast oncoming asteroids to smithereens just like in the 1979 original, but in updated, beautifully rendered, high definition graphics that complement the classic original.

Missile Command: protecting your city from alien missile attacks has never looked better now that this classic has been overhauled with updated graphics and 3D rendered vistas. Choose from the evolved mode or the timeless original gameplay.

Tempest: clear a web of enemies before time runs out and advance to the next stage, using an arsenal of weapons at your disposal. This evolved version features a graphics overhaul while maintaining the same addictive gameplay of the original.

Warlords: a multiplayer classic that resurrects the competitive spirit of arcade games from years gone by. Knock out the other kings in their castles while keeping yourself protected at the same time. Up to four players can join the action with the game taking control of any vacant castles allowing for a variety of single- or multiplayer experiences. Gamers can also import their own pictures to their castles for an extra personalization.

Xbox Live Arcade‘s diverse library of titles is going to keep growing, with a particular emphasis on new, originally developed games from indie developers and big studios alike. Over 100 indie developers and virtually every major console publisher in the world are working to develop games for Xbox Live Arcade. Some of the diverse titles that will be released this holiday include: