Home » News » Sony’s Kaz Hirai cannot even give his begging son a PS3!

Sony’s Kaz Hirai cannot even give his begging son a PS3! 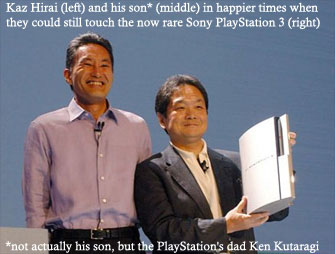 On Sunday at the 2007 Sony Expo in Honolulu, Kazuo Hirai – chief executive of Sony Computer Entertainment America – said about 400,000 PS3 units will be available in the U.S. in the initial launch and an additional 600,000 by the end 2006.

The world’s biggest game developer/publisher Electronic Arts isn’t so sure of that, as in their conference call last week CFO Warren Jenson predicted only 500,000 to 800,000 units would make it onto shelves by the end of December, 2006.

Sony hopes to have a total of 2 million consoles in the U.S. market by the end of company’s fiscal year, which ends in March, 2007. That’s down from 2 million in 2006.

“Unfortunately, there are going to be some shortages,” Hirai said in an interview. “I ask for everybody’s patience. We are pedal to the metal in terms of trying to get as many units as possible into both the Japanese and American market.”

Hirai said he doesn’t even have a PS3 at home yet, even though his 12-year-old son has been begging for one.

“He talks a good game about PlayStation 3 when he’s at school, but he hasn’t touched one and he hasn’t seen one,” Hirai said. “That’s only fair for everybody.”

Meanwhile Yahoo reports that Dyron Mack, a 35-year-old computer analyst, said he can only buy a PS3 without consulting his wife or disclosing the high cost.