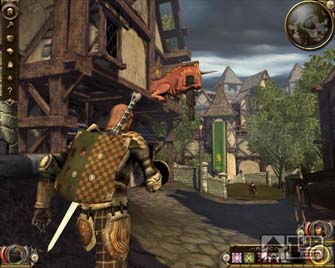 Bioware announced Dragon Age, their latest PC exclusive fantasy RPG, in the new Games for Windows magazine. The game is set for a late 2007 or early 2008 release.

Key features are:
* The story is dark-much darker than the usual BioWare fare-and influenced by “realistic” modern fantasy like George R. R. Martin’s A Game of Thrones.
* The game uses an evolved “tactical real-time combat” style of Baldur’s Gate, only in 3D-you queue up orders for multiple party members, pause the game when you need to think, and your party members will be able to execute coordinated attacks.
* Large-scale creature combat will have your characters doing stuff like ducking between legs and jumping on backs of monsters.
* Even though Dragon Age isn’t a Dungeons & Dragons game, per se, BioWare is sticking close to those roots with the class and rules systems.
* The game uses a “modified” version of the Mass Effect conversation system we’re all so keen on.
* Depending on the type of character you choose, the game offers multiple different “origin stories”-meaning the first few hours of the game will be totally different depending on which character archetype you choose.